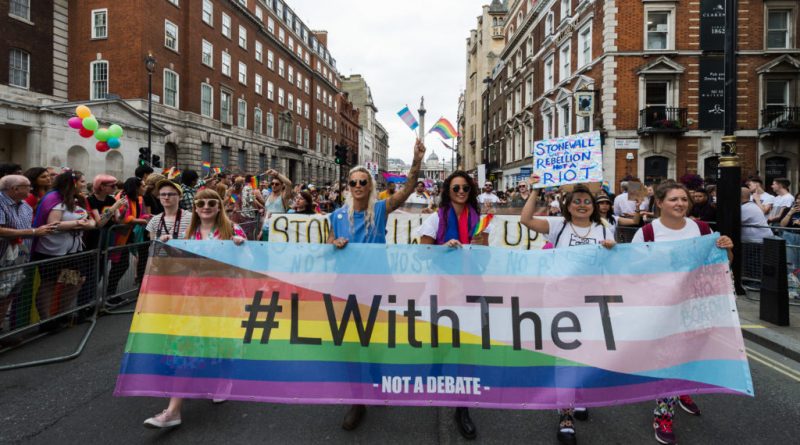 A group of lesbian campaigners show solidarity with the trans community at 2019’s Pride in London march. (Wiktor Szymanowicz/NurPhoto via Getty)

Prominent cis lesbians have accused the BBC of amplifying a “transphobic campaign” and contributing to a “baseless moral panic”.

The 26 October article has been widely denounced by the wider LGBT+ community for relying on a small study carried out by a known anti-trans campaign group to back up its claims, including by more than 10,000 people who have signed an open letter to BBC management.

The criticism also hones in on the fact that the BBC continues to platform anti-trans charity LGB Alliance, which the public broadcaster has received backlash for in the past. In fact, the BBC has previously been branded “institutionally transphobic” by senior MPs, LGBT+ campaigners and public figures for its anti-trans coverage.

“I don’t understand why BBC News has published an article perpetuating the idea that trans women are sexually preying on lesbians,” Riley told PinkNews. “During all my time as the publisher of DIVA magazine and indeed as a member of the community, I have never heard from a lesbian saying she has been pressurised into having sex with a trans woman.”

Riley, who is also the founder of Lesbian Visibility Week, made clear she is “not saying” the accounts of women featured in the article “are untrue”. However, she is “reiterating that this is not a common experience in our community”.

“I have also noticed how many people who are not part of the LGBTQI community are voicing their opinions on this matter,” Riley continued. “An ally’s role is to amplify our voices. They are not amplifying mine, nor the voices of thousands of DIVA readers.

“It seems clear to me that they are amplifying a transphobic campaign.”

Another cis lesbian, Amy, who is based in London, told PinkNews that it is “emotionally exhausting” to see the BBC “stirring up anti-trans rhetoric”.

“It’s also anti-lesbian,” she said, “because this narrative does not fit with the majority of lesbians. It does not speak for me or any lesbians I know.”

Amy points out that many of the individuals driving the narrative that trans women are a threat to cis women are not even lesbians themselves.

One such person, anti-trans comedy writer Graham Linehan, went to the lengths of making himself an account on a queer women’s dating app to “prove” that trans women are dangerous to cis lesbians. Linehan, who is a straight cisgender man, was banned by the app (he is already banned by Twitter for hateful conduct) but spoke on a panel at the LGB Alliance conference last week.

Amy also said that as a survivor herself, she wishes the BBC “would instead chose to spend our money on holding the police and CPS to account on tackling sexual violence and the horrifically poor conviction rates, rather than stirring up hatred that pits struggling minorities against other struggling minorities”.

“The obsession with women’s genitalia in the mainstream media is bizarre and dehumanising – if you don’t want to date someone, you don’t have to, it’s simple. In reality, most trans women are probably dating other trans people who won’t judge them for who they are anyway!

“Please leave trans women alone, please stop painting lesbians as anti-trans and please, let’s get back to fighting misogyny and sexual violence so we can all be free.”

She added that a better use of BBC time and money could be spent highlighting the inequalities that British lesbians do face, “such as the fact we have to have thousands of pounds to access any kind of IUI or IVF treatment in the UK, while straight couples immediately get free IVF when they need it”.

“This is a major issue that is getting very little mainstream media attention, meaning the government is not held to account and lesbians are unable to become parents.”

Other cis lesbians added their voices in support of trans women on Twitter.

“None have ever ‘pressured’ anyone into sex that I know of. This grubby fantasy is identical to the straight sex fears of the 80s about gay people.”

I’ve been a lesbian for almost 50 years. I’ve known trans women, mostly lesbians, all that time. None have ever “pressured” anyone into sex that I know of. This grubby fantasy is identical to the straight sex fears of the 80s about gay people.

Folk singer-songwriter Grace Petrie also pointed out that the real issues lesbians face are rarely covered by the media, and that the BBC is contributing to a “baseless moral panic” against queer women, while ignoring “the real threat of a culture of violence against women”.

“You know what has happened to me, as a lesbian?” she said. “A man once threatened to break my nose when I asked him to stop harassing my then-girlfriend. A group of men harassed me and my then-girlfriend and attacked our home for 10mths w/ vandalism and bricks (once a firework) til we moved.

“I have been physically intimidated by homophobia and misogyny at various points my whole life. None of it has ever been from trans women.

“My experience reflects that of hundreds of lesbians I have met. That article does not reflect the experiences of anyone I have ever met.”

This is of course so much worse for trans women. But there is also something specifically sick about baseless moral panic being whipped up against queer women while yet again nobody wants to talk in a serious way about the real threat of a culture of violence against women.

Responding to criticism of the article, a BBC spokesperson said: “The article looks at a complex subject from different perspectives and acknowledges it is difficult to assess the extent of the issue.

“It includes testimony from a range of different sources and provides appropriate context. It went through our rigorous editorial processes.

“It is important that journalism looks at issues – even where there are strongly held positions. The BBC is here to ensure debate and to make sure a wide a range of voices are heard.”