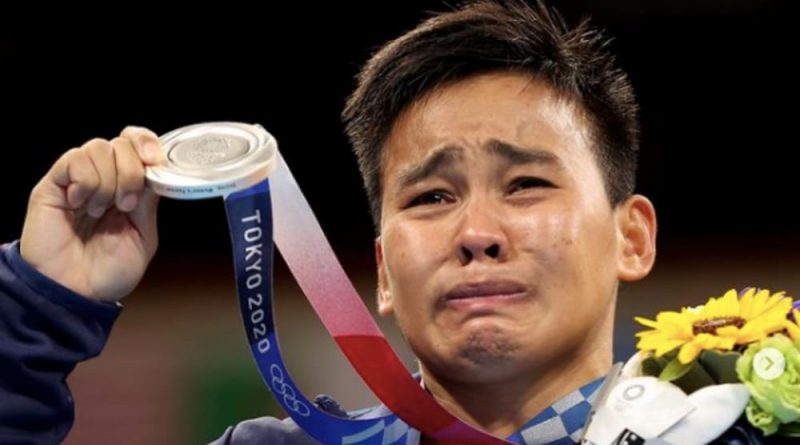 Filipina boxer Nesthy Petecio dedicated her historic silver Olympic medal to the LGBT+ community, calling on them to “go forward” and fight for their rights.

Petecio made history on Tuesday (3 August) when she secured silver in the Women’s Featherweight Boxing, becoming the first Filipino female boxer ever to win an Olympic medal.

After a nail-biting showdown the boxer narrowly lost to Japan’s Sena Irie via an unanimous decision, but showed nothing but pride as she honoured the LGBT+ community with her win.

“I am proud to be part of the LGBTQ community,” said Petecio, who is a lesbian. “Go forward, fight! This win is also for you.”

She added: “Whatever your gender is, as long as you have a dream, keep fighting.”

Petecio’s passion was clear as she wept openly during the awards ceremony, raising her medal on the podium to acknowledge cheers from the Filipinos in the arena.

“I cried earlier because I wanted to dedicate the gold to coach Nolito [Velasco],” she told ESPN afterward. “We came up short but I did my best in the ring.”

Nesthy Petecio’s silver Olympic medal was a huge achievement in the boxing-crazed Philippines where the sport remains strongly male-dominated.

She previously acknowledged the struggle of being a female boxer in her country, saying: “A lot of people think that boxing is only for boys. But as women [boxers], we already earned the respect.”

She’s certainly getting her dues after winning the Philippines’ first Olympic boxing medal in 25 years, following the silver that Mansueto “Onyok” Velasco won in Atlanta in 1996.

But far more important to her than making history is making her family proud. “It means a lot to me because it’s my father’s dream, and it’s also my dream,” she said after her semi-finals victory.

“It’s not just for me. It’s for my country and the Filipinos that prayed for me.”

Her journey won’t end in Tokyo, as she remains determined to claim the gold in Paris 2024. “We’re still chasing the gold,” she said. “We’re not done.”