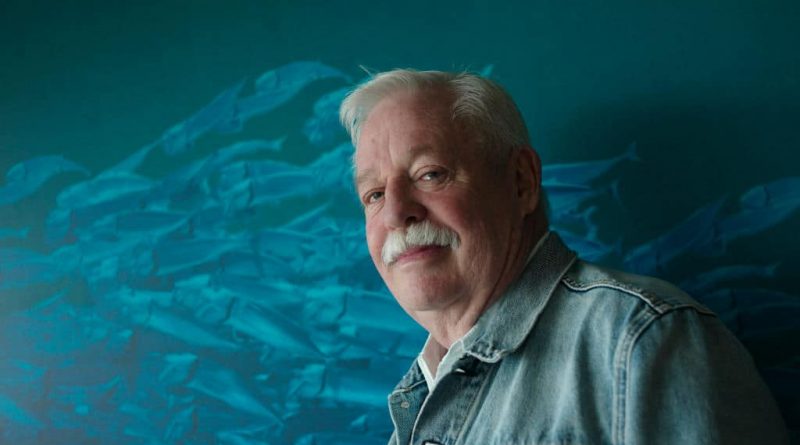 Five years ago, acclaimed gay author Armistead Maupin was given an honorary doctorate by the university he attended many years earlier.

It was a proud moment for the author of Tales of the City, the trailblazing series of books that brought the story of queer San Francisco to the masses.

Naturally, Armistead Maupin expected his family to be proud of him – so he was disappointed to learn that his Trump voting, conservative brother was “embarrassed” of his achievements as a chronicler of queer life in America.

“My university decided to honour me with an honorary doctoral degree about five years ago and I asked my little brother to come to the ceremony, thinking he’d be proud of me, and he was embarrassed to have to do it,” Maupin tells PinkNews.

“He made up a pathetic excuse for why he couldn’t attend. This s**t’s been going on there for a long time. My own family supported Jesse Helms, the conservative senator who was the most homophobic person in congress. I lost all patience with that – I have lost all patience. Finally, at the age of 77, I’m not honouring anybody for biological reasons unless they understand and love me.

“That’s why I push the notion of the logical family, because I think a lot of people are still in a great deal of pain about what their parents will, will not say to them about their lives.”

That powerful sentiment is fitting for an author whose work has touched the lives of LGBT+ people across the world. Through his books, Armistead Maupin has educated countless straight and cis people about queer identities. He has also given LGBT+ people the powerful opportunity to see themselves reflected in literature with flawed, funny and brilliant characters.

PinkNews spoke to Armistead Maupin about his remarkable career, politics, and why he finds British transphobia so repellent.

PinkNews: Take us back to the start – can you tell us a bit about how Tales of the City came to be and how did you create that world?

The first incarnation of it was something called The Serial that appeared in a little Marin County newspaper, just across the bay from San Francisco. I was basically trying to use it as a format for writing about various things, the way singles were picking each other up, the gay bathhouse scene – which I knew something about. But I did just five episodes, and when that newspaper folded I took it to the San Francisco Chronicle and told them I could do it five days a week.

I really had to steel my nerve for that. It was intimidating to say the least. They said, ‘You mean you’ll keep it going forever?’ And I said, ‘Sure!’

It was popular – very popular, and queers were seeing themselves in a daily newspaper for the first time ever.

So much of what was in Tales of the City was really radical for the time. Did you face any pushback or abuse?

The editors were very nervous about it because they didn’t want to lose their conservative readership. But eventually I gained enough power, in terms of the newspapers, they were actually selling based on the presence of Tales of the City, that I was able to call the shots to a certain degree. They were always trying to censor me, they were always telling me what words I couldn’t use. People liked it, and people loved the story, so they would read it even if they were horrified by it.

You were also one of the first writers to talk about the AIDS epidemic – have things improved since the 1980s in terms of cultural depictions of HIV and AIDS, or is there still more work to do?

Well, in Britain you have a genius like Russell T Davies giving us It’s a Sin, which brilliantly recreated the panic and joy and truth of that time. I had to write about it. I was the first person to write about AIDS in the states – anywhere, I guess – because I lost a dear friend to pneumocystis pneumonia in 1982.

He was 25 years old and was sort of the little brother in my logical family. I had to make other people feel the pain that I was feeling, so I killed off a beloved gay character in the series, which was not a popular thing. Many gay people told me I had spoiled their light morning entertainment. But I was glad I did it, because I was planning to keep on writing Tales and I had to find a way to take a basically comedic work and use it to talk about some serious issues.

So much of Tales of the City focuses on the idea of chosen families – why is that such a prominent theme?

Well I had a chosen family. I had moved from the American south to a city that was very, very accepting of gay people. And I wanted to reflect that. I was telling my own story in many ways. I’m glad that theme emerged and that I became identified with it. I’m very proud to be identified with the notion of the logical family. Tales just kind of grew out of my own heart and experience as I was writing – I didn’t have time to second guess it very much.

Tales of the City was brought to a new generation with the Netflix series – what was that like for you?

We went out of our way to hire a team of writers who crossed the waterfront in shades of queer. We had a little bit of everything represented in that eight person writers room – male, female, trans, Black, white, Asian – some people might see that as tokenism gone berserk, but in fact it was a font of stories for us. Everyone could bring their own experience to the table.

How far do you think we’ve come in recent years when it comes to LGBT+ representation in popular culture?

I think we’re doing very well. You look around and there’s queers everywhere now, and that makes me very happy. Tales was a white man’s story at the beginning because I was a white guy, and I was telling the story of the people I knew. But we tried to remedy that with the writing on the new series.

We’ve seen an explosion of queer stories on screen, from the likes of It’s a Sin to Pose. Is there anything in particular that’s jumped out to you?

Well, The White Lotus – and it has brand new angles on the subject matter, it’s not just the coming out story that we used to tell, but the way in which cis queerness figures into a plot line. It’s so much in the landscape now, I have to stop and think about what is and what isn’t [good].

There’s some bad s**t. There’s some seriously bad s**t! And fortunately most queers are discriminating in their tastes – well, not all – but we can tell what’s good and what’s bad and what’s pandering, what’s just there as a thirst trap for teenage girls, mostly. But I’m very optimistic about the way things are going. Everybody is getting to tell their story – just about everybody. Special, that’s a great bit of writing about a guy with cerebral palsy who has a glorious sex life. And in doing so it shows what we all have in common – the occasional need for dick!

Things might be getting better on television, but real life is a different matter altogether. What was it like for you watching Trump in power over the last few years, and do you think things will be better for queer Americans under Joe Biden?

It’s too early to tell whether it’s going to be that much better, but he’s certainly undone a lot of the horrible s**t Trump put into place. When I wrote my memoir Logical Family, in 2017, I had a statement about my brother saying that he had joined what I considered to be a fascist movement in America, the Trump campaign. When I wrote it, I thought, ‘Maybe that’s a little bit too strong.’ I’m glad I didn’t change it because it wasn’t strong enough. Fascism can happen everywhere and it’s happening in America, in pockets, and we have to keep a very close eye on it.

I say ‘we’ – I’m considering myself an Englishman these days. I have British heritage – my grandfather and grandmother were English, and I have cousins over here right now. That’s much easier to align with, for all the f**ked up mess of Boris Johnson. That’s easier to align with than what’s going on in America right now.

It goes without saying that Boris Johnson isn’t the most loved figure within the LGBT+ community. What are your thoughts on the Tory government’s approach to queer people’s rights?

Trans people are getting the s**ty end of the stick right now thanks to a lot of people who call themselves “feminists” and aren’t, in my book. When I first arrived here I did an interview down at The Times, and this very starchy woman told me: “Well, many people here reasonably believe that trans women aren’t women and are detrimental to the cause of feminism.” I was shocked. I was really shocked – I had never heard a woman in the states, in California certainly, ever state anything like that.

And then of course we had JK Rowling step into the fray. It’s people not living in their higher selves – not thinking about what their fellow human beings feel and do and need. And certainly that selfishness is evident in the anti-mask, anti-vaccine movement. It’s here to a certain degree in Britain, but it’s really awful in the states. It’s easy to not understand people’s experience if you don’t look closely enough, and don’t make empathy a way of life. And people my age are sometimes retreating into their old feelings because they can’t deal with it anymore. I had Anna Madrigal say in the last book, The Days of Anna Madrigal: “You don’t have to keep up, dear – you just have to keep open.” That was a note to myself.

You’ve mentioned the scourge of transphobia in Britain – what can we do to push back against that?

Show our support by speaking out against anybody in our circles who are making noises like that. Challenge them, don’t be afraid to call an asshole and asshole. Support your trans friends. Do what you can. It all happens on a personal level, always – it happens to a certain degree on a cultural level, artistically. That’s what I tried to do when I invented Anna Madrigal, who was the first sympathetic trans character in literature.

Things have changed so much for LGBT+ people in the last few decades. Could you have ever imagined things progressing to where they are today when you were growing up in the American south?

I knew very early on we were headed there and I wanted to be a part of it. Everyone advised me against being vocal against matters queer, but it was so much a part of what was important to me that I just embraced it. I’m happy to have moved things forward in that way.

Armistead Maupin will be in conversation with Graham Norton in London’s Queen Elizabeth Hall on 6 October. He will also be speaking in Brighton, Manchester and Bristol as part of his UK tour.