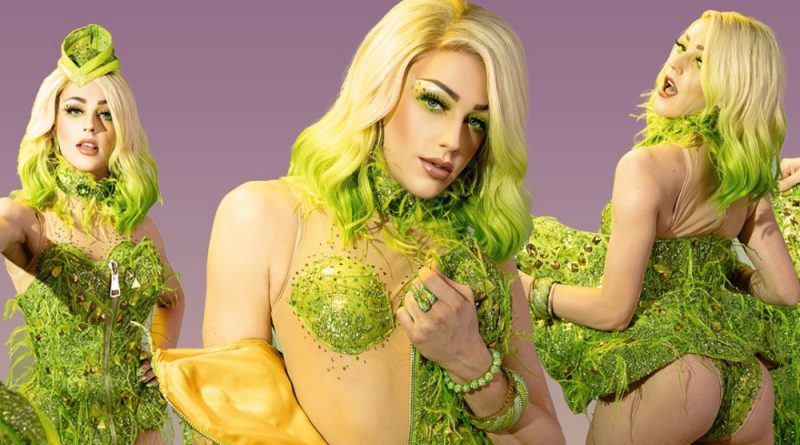 The last few years have seen the RuPaul’s Drag Race star release a string of pop bangers, campaign tirelessly for the legalisation of marijuana and reintroduce herself to the world as a proud trans woman. Throughout all the chaos, she even made time to return to Drag Race All Stars as a lip-sync assassin, reminding the world of her charisma, charm and high-octane choreography.

Estranja’s effervescence is evident even over a long-distance call. It’s barely 10am in Los Angeles, yet she’s already finished a hot yoga session and briefly explained the story behind her Zoom screen-name, ‘C**ty’.

“I have no idea how that became my name,” she laughs. “It gets a lot of comments though, so I decided to keep it!”

It’s been a busy few months; not only is she working on an upcoming trilogy of books and sorting the paperwork to launch her own trans healthcare non-profit organisation, Laganja remains committed to the causes close to her heart. Fresh off the release of latest single “Poison Ivy”, she’s cleared her morning schedule to chat all things cannabis, Drag Race, trans healthcare and, of course, those “sickening” memes.

There’s been a lot going on in your life lately, but I wanted to start with ‘Poison Ivy’. How did the idea to make a straight-up Halloween banger come about?

I was supposed to go on a UK tour in October and really wanted my own single and visuals to perform. I was devastated when it was cancelled because I had invested so much money into the looks and the music, so I decided I wouldn’t let COVID stop me. I flew to Atlanta, where I made the track with my incredible music company BSE, and my dear friend Ryan Snow directed the video. We recorded the song and shot the video all in seven days, so I’m extremely proud of the piece we created.

As for inspiration, Uma Thurman is definitely my favourite Poison Ivy – probably because she becomes a showgirl! There’s one look where I have the red hair in two columns, but of course we used cannabis leaves for my bodysuit.

Your cannabis activism earned you a Forbes profile, and you’ve spoken openly about medical marijuana helping you. Do you think weed stigma is starting to relax?

I’m lucky to live in California where it’s been legal to use recreationally for several years, but I do live in a bubble. As someone from Texas, I can tell you the stigma is very much alive in other states. More places are moving towards decriminalisation, but there’s still a lot of work to be done. We need to see TV characters who can smoke weed without it being a big deal, like alcohol. In my opinion, alcohol is way worse; I’ve struggled pretty much my whole adult life with alcohol. I really think cannabis is safer, so I hope we can reach a day where I can just go to a cannabis bar as opposed to a regular bar, where so many LGBTQ+ people are really drowning their pain in alcohol.

You’ve touched on a lack of inclusivity in cannabis activism, despite the fact people of colour are way more likely to be locked up for possession. Do you see that changing?

There’s been minimal progress. People are starting to recognise these facts, especially with the BLM movement; I think it helps people to start focussing on social equity and giving back to those people who continue to sit in jail while we’re having weed delivered to our doors. There’s a lot more work to do, because we need to free our brothers and sisters – particularly those of colour – from jail, and create more space within cannabis activism for queer and gender non-conforming people to feel safe.

Through Laganja, you created this funny, larger-than-life vehicle to have these conversations. Do you think humour is a good tool when it comes to tackling stigma?

Laganja: Well, cannabis is the second-best medicine; the absolute best is laughter! I think it’s a great way to break the ice and help people who might be uncomfortable feel safe to explore this kind of plant medicine. I totally believe in the power of healing through laughter.

That flair for comedy has turned you into meme royalty. Do you have any favourites?

The top two are definitely my entrance from season six, as well as my infamous Untucked, where I felt very attacked! I hope the memes continue to live on, hopefully many years after I leave this earth. I was kind of hurt by the memes at first, because I thought people were laughing at me. Since I joined in on the joke, I’ve been grateful that even rocky moments have been able to provide laughter. With my All Stars entrance, someone in the Philippines cut his big gymnastics jump into my split! The fact that it keeps giving life to so many communities worldwide is such a blessing.

What made you decide to come back for All Stars?

I’ve been wanting to come back as an assassin, but I made it clear I wasn’t interested in being a competitor. I love the brand and I’m actually trying to come back as a choreographer, but I know what’s best for me as an artist. I didn’t want to go back as a competitor and have to spend all that money, so I’m grateful I got to go back my way and that I got to wait, so I didn’t put my health at risk. When I proposed my grand entrance to production, they did everything in their power to execute it the way I wanted.

You touched on cash – do you think people are starting to understand how expensive it is to compete?

People are more aware, but I don’t think people really understand that for the last All Stars season people were paying between $25,000 and $50,000 to go and compete. It costs an insane amount of money to be a Ru Girl these days. I feel sorry for the girls on the newer seasons, because the expectation is unreal. I spent about $8,000 in total on my season, and nowadays I don’t think even that would cut it. Every cent I make gets poured back into my art, so I tell people that if you want to get into drag you have to love it.

Another milestone is that you came out as trans on social media; how long did it take for you to decide to share that?

A long, long time. I’m 32 years old, and now we see people coming out at 16. I never really suffered from body dysmorphia because I grew up in the ballet world where most girls were flat-chested. I never really viewed my body as an issue, which I think is why it took me longer to realise my truth. About two years ago, I came out to my closest friends. I lived my truth privately for two years, but finally decided I had to come out. I was fearful of what my parents would say, but I wanted them to know even if it would hurt or confuse them, so I went home in June this year to let them know. Two weeks later, I told the world.

I’m so grateful the reception was so positive. If I’m honest, there was part of me that felt guilty because I saw my sisters of colour not receiving the same love, and that made me sad.

Definitely, we see racism across the board – within trans communities, drag communities, in the world more generally.

I hope people continue to educate themselves and do the work to end oppression. I’m continuing to educate myself so I can be a real trans activist, because I’m brand new at this – I just came out. I know so much about cannabis so I can claim that advocacy, but I need time to do that when it comes to finding those answers within trans fields.

I chose to be a public figure though, so I’m up for the challenges that come with it. I chose to come out so publicly so people could see trans is beautiful, that there’s not just one story. I’m in LA surrounded by trans women who look like perfect dolls, and that’s just not my story, at least not now. I haven’t even started hormones. I didn’t suffer dysmorphia, but I definitely suffered from having a beard and feeling the need to be masculine on my off days to attract gay men. Eventually I’ll get electrolysis and lose the beard, and hopefully I’ll find a man – either straight or queer – who’s interested in women.

It feels like you’re sparking valuable conversations by sharing your own education with fans, even through dissecting the ignorant messages you’re sent.

Yeah, the message you’re speaking about was from a gay man, so I wanted to show there are so many LGB people still fighting the T. It’s been that way since the beginning, yet the only gay people have rights is because of our trans brothers and sisters of colour. I was shocked by the message, which basically said I was coming out as trans for attention because I hadn’t had breast implants, or tried to change my voice and how I was living my daily life. First of all, nobody changes their gender for attention – that’s crazy! If they do then wow, they’re really committed. I’m grateful that messages like that don’t hurt me, because I know my truth, so I use those as teaching moments to show we’ve got to do better here.

I wanted to touch on your GoFundMe. Do you think speaking so publicly about the cost of transition has raised wider awareness of failures in trans healthcare?

First of all, shout out to my sister Yuhua [Hamasaki] for starting that, I was so shocked and grateful. What it showed me is that I had thousands of people willing to give me anywhere from $1 to thousands of dollars, and that really inspired me. The goal was $25,000 but we raised $30,000, so I’m giving that $5,000 to the Trans Wellness Center here in Los Angeles. I’m also in the process of trying to start my own foundation – Honoring Her – which gives back to trans women, and my goal is to be able to raise $5,000 to give to various individuals, who will of course be vetted, so they can begin their own transition.

I had really convinced myself I didn’t need things like surgeries, because I knew I wouldn’t be able to afford them. Now I have that little pocket of money, there’s a huge weight off my shoulders but I’m also realising how many others need that help too. There are so many trans people without a platform who need those resources, so it’s really important for me to help in that way, too. Trans healthcare is so minimal, and that really needs to change. The only way we’re going to do that is by doing it ourselves as a community.

Finally, with so much going on, what are the small things that bring you joy?

Hot yoga, the new Kacey Musgraves album and, of course, a good joint!