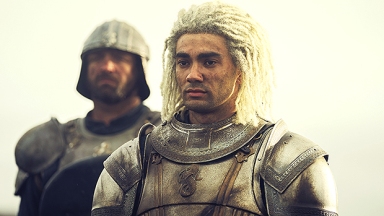 
Get ready to see a whole lot more of Laenor Velaryon in House of the Dragon. After saving the day with Seasmoke in episode 3, Laenor’s role within the HBO series is going to become much more crucial in the episodes to come.

More ‘House Of The Dragon’ News:

So, who is Laenor Velaryon? You’ve already met his parents and his little sister. He will also be marrying one of the show’s main characters. Here’s a breakdown of what you need to know about Laenor.

Who Is Laenor Velaryon?

Laenor Velaryon is the oldest child of Corlys Velaryon and Rhaenys Velaryon. The Velaryons are a powerful and rich family in Westeros. Corlys is known as the “Sea Snake.” Corlys is on King Viserys’ small council and serves as the Master of Ships.

Driftmark is the home of the Velaryons. Given that he is Corlys’ son, Laenor is the heir to Driftmark. Laenor fought alongside Corlys, Vaemond Velaryon, and Daemon Targaryen in the war against the Crabfeeder.

In episode 3 of House of the Dragon, Laenor came up with the plan that would ultimately lead to Daemon killing the Crabfeeder. He proposed sending in a man as bait and tricking the Crabfeeder and his men into thinking they had surrendered. While Vaemond didn’t think anyone on their side would go for this risky mission, Laenor thought that Daemon would. He was right.

The younger version of Laenor Velaryon is played by newcomer Theo Nate. The older version will be played by John Macmillan. Prior to House of the Dragon, Theo appeared in a 2021 episode of the TV series Time. The HBO series is his second overall acting credit.

Alicent Hightower: What You Need To Know About Viserys’ New Wife In ‘House Of The Dragon’

Does Laenor Ride A Dragon?

Yes, he sure does. During the final face-off with the Crabfeeder, Laenor showed up riding his dragon, the silver-grey Seasmoke. He arrived just as Daemon was surrounded by the Crabfeeder’s men. Seasmoke lit the battlefield up in flames. This allowed Daemon and Corlys’ men to get the upper hand.

Laenor is one of many dragonriders in House of the Dragon. Rhaenyra Targaryen rides Syrax, while Daemon rides Caraxes. Leanor riding Seasmoke in episode 3 marks the first time a person of color can be seen riding a dragon in a Game of Thrones series.

Who Does Laenor Marry?

If you’re aware of the Targaryen lineage, then you know that Laenor and Rhaenyra end up marrying, uniting House Velaryon and House Targaryen. In episode 3, a marriage for Rhaenyra became a major priority for Viserys. Lord Lyon Strong mentioned Rhaenyra marrying Laenor, which would forge an unbreakable alliance with House Velaryon. Earlier in the season, Laenor and Rhaenys pitched the idea of Viserys marrying their daughter, Laena Velaryon.

Viserys decided to leave it up to Rhaenyra to decide who she should marry. As explained in George R.R. Martin’s Fire & Blood, Rhaenrya and Laenor wed. However, it is widely known that Laenor was gay. Rhaenyra and Laenor’s marriage was an alliance rather than one based on love.

Does Laenor Have Children?

Yes, Laenor and Rhaenyra do have children, at least on paper. Rhaenyra gave birth to three sons during their marriage: Jacaerys, Lucerys, and Joffrey. However, it’s rumored that Ser Harwin Strong, Rhaenyra’s love, was the true biological father of Rhaenyra’s sons with Laenor.