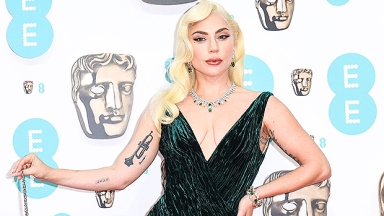 
Lady Gaga is all about visual presentation. When the 36-year pop star/actress first burst onto the scene with her hit single “Just Dance” in 2008, what followed was an invitation to all the Hollywood A-list events, prompting a cavalcade of headline-making outfits that quickly cemented her reputation as a true artist. From dresses made of raw meat to fireworks-shooting brassieres, Lady Gaga turned the red carpets into her own personal runway for individual expression.

The superstar– whose real name is Stefani Joanne Germanotta — would end up turning her talents for finding creative outlets towards herself; this time in the form of body art. The “Born This Way” singer has quite the collection of tattoos; some of which are noticeable, while others are kept under wraps at times. They include tributes to family members, fans and some of her favorite projects she’s ever worked on. Let’s unpack the House of Gucci star’s glorious ink, below!

Let’s start with one of the tattoos that Gaga has called her favorite in the past. And as she has always had a special place in her heart for her fans, who have been called her “little monsters”, it’s fitting this one pays tribute to them. In 2014, the singer got a “monster paw” inked on the left side of her back. “It’s the Monster Paw, the symbol of my fans as they have held their paws high in the crowd every night since we became a community,” she told a fan during a Reddit forum. “I cherish it for its meaning, the loyalty, devotion, and strength we share. I wanted it engraved on me forever.”

Of course, her “little monsters” have a name for the queen herself: “Mother Monster”. To solidify the moniker, Gaga added the words “Mother Monster” with lace detailing to a large piece of body real estate that stretches from her ribcage to her armpit.

To bring the tribute to her legion of stans full circle, Gaga had “Little Monsters” tattooed in calligraphy near her left elbow in 2010. At the time, she took to Twitter to show off the piece, writing, “look what i did last night. little monsters forever, on the arm that holds my mic.”

Gaga’s dad has played a big part in her life and she made sure to take a piece of him whereever she goes in her worldwide travels. On her left shoulder, she got the cutest tattoo of a heart with the word “dad” inside it.

There’s no question Gaga’s aunt Joanne Stefani Germanotta has a special place in the singer’s heart, as she was inspired to name her 2016 album after the relative. Around that time, Gaga had her aunt’s signature inked on her forearm. “Got Joanne tattooed on my arm in her actual signature,” she wrote on Instagram alongside a snap of the tattoo. “My dad got one too. With an angel on his shoulder.”

In another family tribute, Gaga gave an amazing shout out to her fashion-designing sister Natali, whose nickname is “Mouse.” On the back of her arm, Gaga has a cartoon mouse threading a sewing needle with the word “Nat” at the end of the thread.

Early on in her career, Gaga traveled to Japan where she decided to commission one of her grandest tattoos: a quote by poet Rainer Maria Rilke from the author’s Letters to a Young Poet. Written in curling German script, the words translate to: “In the deepest hour of the night, confess to yourself that you would die if you were forbidden to write. And look deep into your heart where it spreads its roots, the answer, and ask yourself, must I write?”

To celebrate her album Born This Way, Gaga went with a unicorn tattoo placed on her left thigh. She explained its significance during an interview with Big Top 40 Show in 2011. “I had My Little Ponies. I was obsessed with the idea of a creature that was born with something magical that sort of made them the misfit in the world of the stallion. I’m actually quite obsessed with unicorns,” she said. “They are, in essence, a mythical creature. The unicorn is born magical and it’s not the unicorn’s fault and it doesn’t make it any more or less special or any less unique, but it can’t help that it was born with that magic.”

A month after rock icon David Bowie passed away in January 2016, Gaga immortliazed him with an image of his face tatted onto the left side of her rib cage. A few days later she took the stage at the Grammys to perform a tribute to David. “When I fell in love with David Bowie, when I was living on the Lower East Side, I always felt that his glamour was something he was using to express a message to people that was very healing for their souls,” she told the Hollywood Reporter before the show. “He is a true, true artist and I don’t know if I ever went, ‘Oh, I’m going to be that way like this,’ or if I arrived upon it slowly, realizing it was my calling and that’s what drew me to him,” she told The Hollywood Reporter before the awards show.

In 2012, Gaga went with another fan-inspired tattoo, this time paying homage to the city of Rio de Janeiro. “R†O. Monsters, all over the world you continue to inspire me every day, you’re like an endless ocean of possibilities,” she wrote on Twitter at the time, before explaining how it came to be in a follow-up tweet. “The font was derived out of the signatures of three fans, all from different neighborhoods and ages,” she shared. “Represents how music brings us 2gether.”

Inspired by the 1917 book “A Handbook of Ornament”, a cherub was tattooed on the back of her head. And it all went down in front of a live audience at New York’s Solomon R Guggenheim Museum while she was launching her Fame perfume. Tattoo artist Mark Mahoney described the design as a “kind of a Renaissance era cherub,” making it a “a nod to her Italian heritage,” per the DailyMail.

Gaga’s good friend and longtime collaborator, Tony Bennett, is said to have designed the trumpet art that now sits on right bicep. She first showed off the masterpiece on Instagram, captioning it, “Bennedetto. Tony’s an artist.”

For the 2015 documentary The Hunting Ground, Gaga co-wrote the song “‘Til It Happens to You,” which she ended up performing at the Oscars as it was nominated. About two dozen survivors of sexual assault joined her on stage during the rendition; one of which, Jackie Lin, designed the tattoo. Gaga had the art put on her left shoulder.

As a tribute to her work on A Star Is Born, which she was nominated for a Best Actress Oscar, Gaga had a very large tattoo of a rose inked on back following the length of her spinal cord. In the movie, Gaga performs the famous Edith Piaf song in a bar. Legend has it that Bradley Cooper saw Gaga perform the song at a charity event and knew she would be perfect for the film!

If only everyone could have such a creative way to get their name tattooed on themselves! Gaga had a musical staff with the four notes that spell out G-A-G-A inked on her right arm. She also originally only had four lines in the staff, but she corrected it by adding the fifth afterwards.

Among her myriad of tattoos, Gaga also has a peace sign, daisies, an anchor, roses, an ARTPOP album tribute, a treble clef, one that reads “haus” and another that reads “Tokyo Love”. There’s no doubt Gaga’s collection will continue to grow. And HollywoodLife will keep you posted on any new developments!