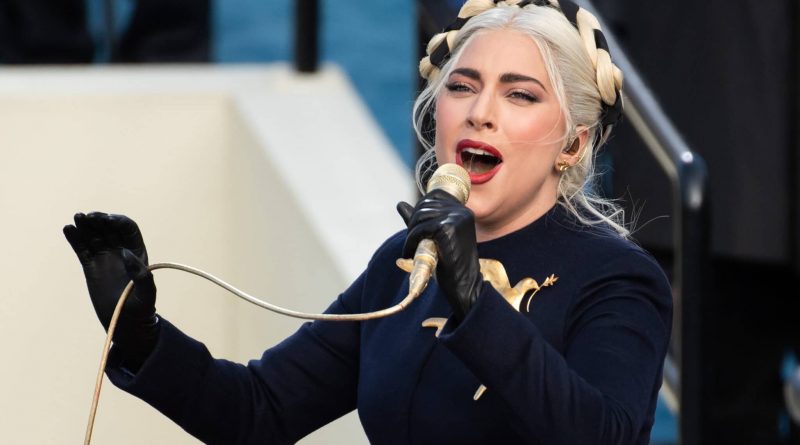 Singer Lady Gaga performs during the 59th Presidential Inauguration at the US Capitol on January 20, 2020. (Saul Loeb – Pool/Getty Images)

Lady Gaga has revealed she snooped around for “evidence of the insurrection” in the US Capitol the day before her presidential inauguration performance.

Gaga, 35, recalled singing at president Joe Biden’s swearing-in ceremony while wearing a “bulletproof dress” in an interview with British Vogue.

It was one of the “proudest days of her life”, she said, with Biden’s arrival coming as a great release.

“Like many people in America, I felt a deep fear when Trump was president,” Gaga said, “and ushering 45 out and 46 in is something I’ll be able to tell my children all about. Singing in a Schiaparelli bulletproof dress.”

Days before the inauguration in January, the US Capitol was stormed by Trump supporters attempting to overturn the results of the presidential election.

“When I was at the Capitol, the day before the inauguration, I remember walking around and looking for evidence of the insurrection,” Gaga revealed.

“I don’t know if people know this about me,” she explained, “but if I weren’t who I am today, I would have been a combat journalist.

“That was one of my dreams.”

Lady Gaga: ‘I feel ready to declare myself whole’

Gaga has previously spoken about her mental health, specifically her struggle with PTSD, which she developed as a result of being raped when she was 19.

Gaga told Oprah Winfrey last year that the pain she has long lived with was so great it manifested as fibromyalgia, a condition marked by widespread pain, fatigue and cognitive difficulties.

Speaking to Vogue, Gaga reflected on how her mental health was also impacted by her sudden rise to superstardom in her early 20s.

“There was a long time when I didn’t think that I could heal from becoming famous at such a young age,” she said, “and what it did to my brain.

“But I feel ready to declare myself whole. We will never all be fully whole, but it’s certainly enough. I have a lot of gratitude for joy.

“It’s been pretty recent, yes. I would say over the past two years.”

This hurt, Gaga said, is what she channelled into her most recent album, Chromatica. “I don’t think I’ve ever been in more pain in my life than I was making that record,” she candidly explained.

“It’s because they came from a very, very black hole in my heart.”

While making the album, Gaga said she “didn’t want to be me anymore”. Her self-worth and sense of personhood, she said, were more or less non-existent at the time.

“But I made it anyway,” she said. “I said this to a friend the other day – whenever I go through hard times now, I always say with a laugh: ‘Yeah, this is hard. But it’s a lot harder when you want to kill yourself every day.’

“I believe wholeheartedly that the universe made this a part of my story so that I could be prepared to talk about it with the world.”