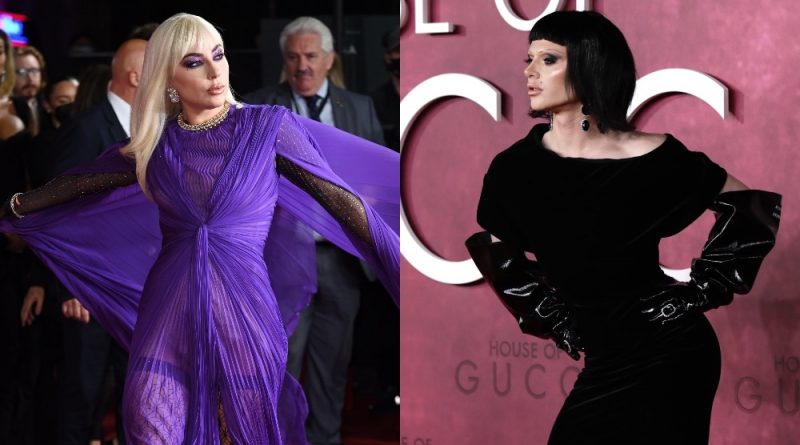 The House of Gucci red carpet was a constellation of camp. (Getty Images)

The House of Gucci red carpet in London was one of high camp and high drama – and Lady Gaga obviously stole the show.

It was anything but a low-key affair at the Odeon Luxe cinema in the capital city’s Leicester Square as a constellation of stars served some aggressively Gucci looks.

And on Tuesday evening (9 November), Gaga’s MO was very much GG: Gucci and Glamour. As was the rest of the House of Gucci cast, who dialled up the camp as they stepped out in some seriously jaw-dropping garbs.

Here are 10 of the best fashion moments of the House of Gucci premiere.

Gaga threw on – casually of course – a vibrant violet thigh-split dress cut to showcase her knee-high stockings and towering boots.

The star was photographed wafting the dress, which she accessorised with sheer gloves, silver jewellery and swathes of adoring fans, as she strutted the carpet.

Salma Hayey plays Giuseppina “Pina” Auriemma in the film and in real life is married to French billionaire and Kering CEO François-Henri Pinault.

Kering is a parent company of Gucci, so surprise surprise, she donned a glowing gold lamé gown by the brand.

Clara Amfo, a British radio presenter who is divinity incarnate, dressed in a black suit with power-pink lapels.

Cynthia Erivo wore what can only be described as the comfiest looking red-carpet outfit in recorded human history  – a drop-knit blue sweater with a matching skirt and Bottega Veneta bag.

In other words, they dressed for the funeral of the patriarchy they just slew.

Understanding the assignment was Mădălina Diana Ghenea, who stars as Sophia Loren, the Italian actor who embodied international Hollywood glamour.

Jared Leto wore a blue velvet suit with a shawl lapel with white-heeled boots and a diamond necklace.

In House of Gucci, he stars as Paolo Gucci, the former Gucci design chief behind the brand’s signature interlocking double G logo – and behind many of the leather goods family’s high-profile rows and squabbles.

In a red velvet suit to match the House of Gucci red carpet was Marc Jacques-Burton, who founded the British street-wear label MJB.

Lady Gaga finished her show-stopping ensemble with fishnet tights that easily became the main character of the evening.

Adam Driver, who wore a notch-lapel suit, was also there.