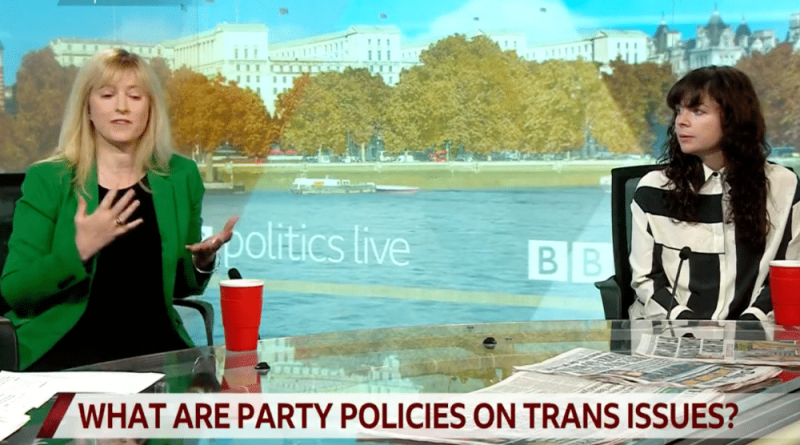 Duffield, who has been MP for Canterbury since 2017, repeatedly called trans women “male-bodied people” on the show, and argued against the inclusion of trans women in single sex spaces such as women’s prisons and hospital wards.

Speaking on BBC Politics, she said: “If you are a woman, who has been abused all of your life and ended up in prison, you may not feel quite that liberal towards someone in a male body who is then allowed onto your wing of the prison.

“You may have had a lifetime of abuse and rape, which has been done to you by a man in a male body, and when they’re just calling themselves a woman you may feel very differently about being in a hospital ward with them or a prison wing.”

She added that cis women “have the right to at least debate or talk about whether people in a male body are allowed into single-sex spaces.”

“I want the viewers at home to really think about why it might be upsetting for a transgender woman” to have an MP “call them ‘male-bodied people'” says Ellie Mae O’Hagan of the CLASS think tankhttps://t.co/wHYWst78se #PoliticsLive pic.twitter.com/A6q3mbHvVt

Fellow guest Ellie Mae O’Hagan, of the CLASS think tank (Centre for Labour and Social Studies), hit back at Duffield during the segment, saying that her views may be “upsetting” for trans women to hear.

“When we’re saying that a small group of people should not be allowed to live as they are because other people might be upset about it, well that is the very essence of discrimination,” she said.

“I want the viewers at home to really think about why it might be upsetting for a transgender woman… to have somebody in public life who’s a representative of the public and has a big public platform and a lot of responsibility call them ‘male-bodied people’.”

Trans author and activist Paris Lees criticised Duffield’s language on the segment, explaining that such views make her feel that “I don’t want to live here anymore”.

“Duffield wouldn’t want to share a hospital ward with what she calls ‘male-bodied people’, i.e. trans women. That’s ME,” she wrote on Twitter.

“These endless and completely unnecessary insults are making me feel I don’t want to live here anymore.”

Thank you @elliemaeohagan for speaking with calm compassion. Duffield wouldn’t want to share a hospital ward with what she calls “male bodied people”, ie trans women. That’s ME. These endless and completely unnecessary insults are making me feel I don’t want to live here anymore. https://t.co/C0wWP3UbK5

Lees added: “We have a decision to make as a society, whether we want to give in to visceral prejudices and fear of people who seem different… or if we build a society where everyone feels safe, valued and respected.”

Duffield has previously attracted widespread criticism for her trans-exclusionary remarks and has been accused of transphobia, including by former staffers who quit her office citing her views.

Duffield strenuously denies that she is transphobic and says that she supports the LGBT+ community. In July it was reported that the Labour Party was investigating the allegations against her, but no outcome has been publicly announced. There have been calls for the whip to be withdrawn from her.

“Women’s rights are not in conflict with trans rights,” she stated at the event.