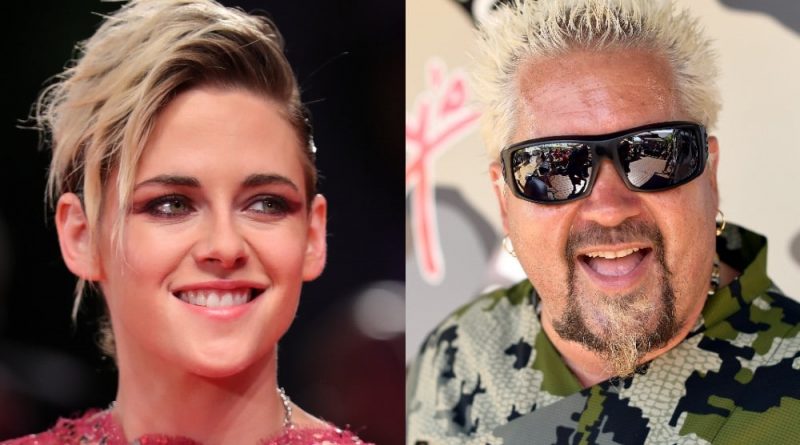 Kristen Stewart has already started planning her wedding to fiancée Dylan Meyer, and she wants celebrity chef Guy Fieri to be the one to officiate.

After announcing her engagement to screenwriter Dylan Meyer, the Spencer star shared her plans for the big day on The Howard Stern Show.

She told Stern that she and Meyer would probably opt for a non-traditional ceremony and officiate their own wedding, unless a certain “spiky-headed man” wants to step in.

“We’re either going to have like no one, we’re just going to do it ourselves and just not have somebody officiate to sort of have another party involved in our moment,” she said.

“But we did hear that Guy Fieri from the Food Network officiates a lot of gay weddings.

“So, the idea of that man – that sweet, sweet spiky-headed man – coming to our wedding and officiating it, it just makes me laugh so much.”

While the idea of the TV chef presiding over Kristen Stewart’s wedding might seem surreal, 101 same-sex couples have had the honour of Flavortown Fieri as their wedding officiant.

The star made headlines in 2015 when he officiated a mass same-sex wedding ceremony in Miami to pay tribute to his late sister, who was gay.

Was an honor to be part of such an amazing day for so many loving couples #101gayweddings #sobewff pic.twitter.com/DP6olKrToK

Kristen Stewart has yet to hash out the details with Fieri but she’s already got a clear vision of what the day will look like.

“I want it to be pretty chill… It’s kind of just a great excuse to get together and say ‘I love you’ in front of all your friends,” she said. “I want to get married in, like, Topanga. I want to be chilling. I want it to be very homey.”

As for her outfit, the actor plans to ditch the wedding gown and will probably go for jeans and a cut-off tuxedo t-shirt for the ceremony. She also said she and Meyer won’t have a live band for their celebration, telling the host: “No, you need the hits.”

The happy couple got engaged after a two-year romance. Stewart said she met Meyer met on a movie set about six years ago, but they didn’t start dating until 2019.

Within a few months Stewart was already to settle down, telling Howard Stern she couldn’t “f**king wait” to propose to Meyer. “I think good things happen fast,” she said.

But when the moment came, Meyer was the one to get down on one knee.

“I wasn’t specific at all. It’s not a given that I would be the one [to do it]. You know what I mean? With two girls, you never know like who’s going to fulfill what weird f**king gender role thing,” Stewart said.

“We don’t do that or think about it in those terms. She just grabbed that bowl and made it happen. It was f**king so cute.”