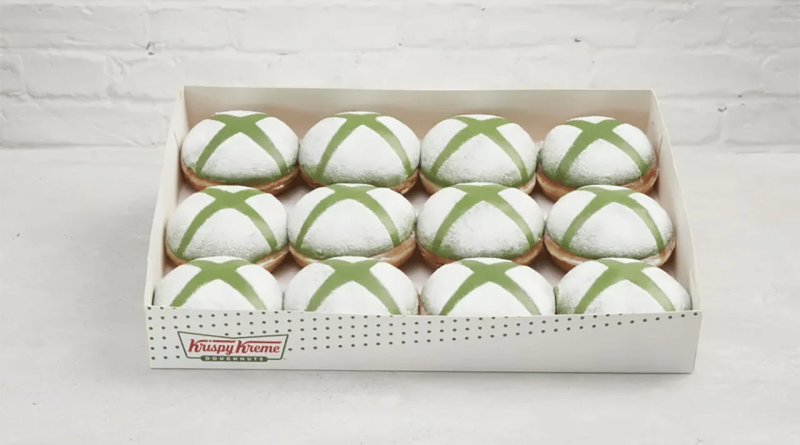 Xbox and Krispy Kreme are collaborating on a brand new limited edition doughnut.

Called “The Nexus Level”, it features the enigmatic Xbox Nexus logo on the top in alluring green to celebrate 20 years of Microsoft’s consoles.

It’s made with an “irresistible light and fluffy dough with a rich and gooey brownie batter, dipped in icing and decorated with the iconic Xbox logo”. Forgive us for drooling.

Krispy Kreme has released a comedy video on Twitter to promote the delectable new product, spoofing the launch of the Series X console.

Welcome to the next generation

“We’re truly excited to be sharing this revolutionary product with you,” it says. We can’t wait for our taste buds to be revolutionised.

It also says: “With instant sharing capabilities it’s bringing people together.” Sorry, we won’t be sharing a doughnut with anyone.

The doughnuts are 370 calories “per portion”. We presume that’s just a single doughnut though, not a dozen.

With the first box of a dozen doughnuts bought, you can upload a code for one month of Xbox Game Pass Ultimate, providing instant access to over a hundred Xbox titles.

That also enters you into a prize draw to win an Xbox Series S.

Xbox Game Pass is the subscription service that allows subscribers to access the best games on the console for a monthly fee, including brand new releases and classics.

So, what games should you play first with your free month of Xbox Game Pass Ultimate?

Lucky for you we have a guide on the best LGBT+ titles available on the subscription, including Tell Me Why, The Outer Worlds and Celeste among many more.

The doughnuts will be available for a short time from 2 – 22 August. Doughnut miss out!