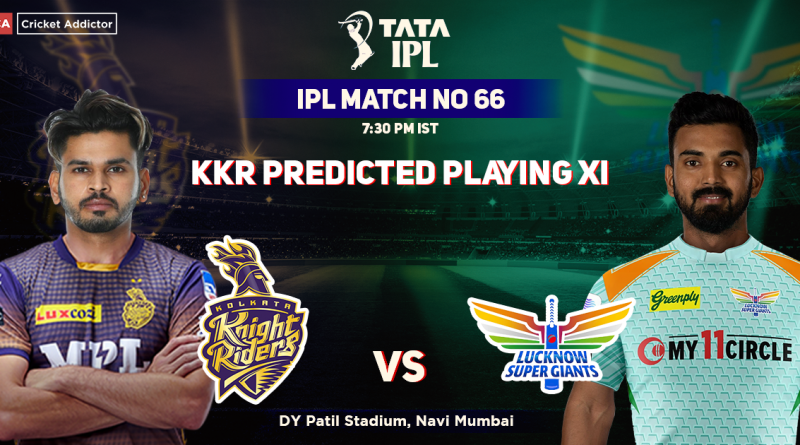 
Kolkata Knight Riders vs Lucknow Supergiants, KKR Playing 11 vs LSG (Predicted), IPL 2022, Match 66, KKR vs LSG. Kolkata Knight Riders vs Lucknow Supergiants 66th IPL 2022 match is to be played on 18th May 2022, 19:30 IST at Dr. DY Patil Sports Academy, Mumbai. KKR would have to hope that RCB loses against GT and stay on 14 points and the winner of DC vs PBKS also loses their last game.

Lucknow Super Giants are also all but assured of a playoff spot. But with their loss to Rajasthan Royals, they slipped to 3rd place. This means if they don’t win their last match against KKR, they will not be in Qualifier 1.

Kolkata Knight Riders made as many as five changes in their penultimate game against Mumbai Indians, bringing back Ajinkya Rahane, Venkatesh Iyer, Varun Chakravarthy, Sheldon Jackson, and Pat Cummins. The Brendon McCullum-led KKR management has come under fire for their choices which led to the team’s campaign getting derailed after winning three of their first four matches.

KKR remains alive in the competition with back-to-back big wins over Mumbai Indians and Sunrisers Hyderabad. KKR are now 6th with 12 points to their name and will hope to win their last game and remain in the hunt for the playoffs.

Umesh Yadav is the 2nd leading wicket-taker for Kolkata with 16 wickets from 11 outings and almost guarantees a wicket or two in the powerplay which sets the tone for the rest of the match. He will have added responsibility as Kolkata Knight Riders bowling all-rounder Pat Cummins has been ruled out of the IPL 2022 after suffering a minor hip injury.

Kolkata Knight Riders (KKR) registered their 6th victory in the ongoing Indian Premier League (IPL) 2022 after beating the Sunrisers Hyderabad (SRH) by 54 runs on Saturday at the Maharashtra Cricket Association Stadium in Pune. Andre Russell put on an all-around show in KKR’s comprehensive 54-run victory after scoring a blistering 49*(28) followed by a three-wicket haul.

Lucknow Supergiants had earlier beaten Kolkata Knight Riders in their previous IPL 2022 match by 75 runs at the Maharashtra Cricket Association Stadium in Pune. A half-century from Quinton de Kock along with Avesh Khan’s three-wicket haul powered LSG to a comprehensive victory by 75 runs as they successfully defended their total of 176.

Released from India’s Test team and picked by Kolkata Knight Riders for his base price of ₹1 crore, Ajinkya Rahane looked like a million bucks during his stay against CSK. Ajinkya Rahane scored 44 off 34 balls with six fours and one six and provided a good start to his team. He has scored 133 runs averaging only 19 in 7 IPL 2022 games with a best of 44 in the season opener.

Abhijeet Tomar, still in the early days of his cricketing career, has 9 List A games to his name having scored 389 runs at an average of 48.62. He also has 2 half-centuries and 1 century to his name. Known for his hard-hitting capabilities, Abhijeet Tomar would be looking to make the most of his opportunities on his IPL debut.