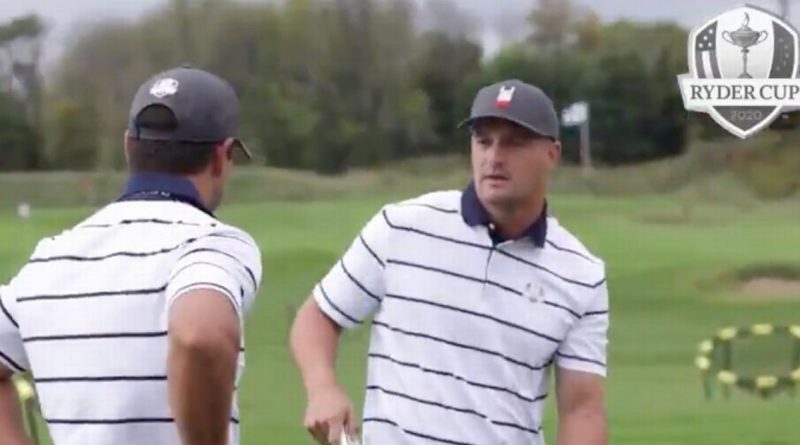 
Heading into the Ryder Cup at Whistling Straits, much of the talk has been dominated by Brooks Koepka’s rivalry with American team-mate Bryson DeChambeau

Can Brooks Koepka and Bryson DeChambeau work together?

Butch Harmon believes US team-mates Brooks Koepka and Bryson DeChambeau have blown their rivalry out of proportion, before remarkably claiming the duo should be paired together together at the Ryder Cup.

Their feud dates back to January 2019 as Koepka criticised DeChambeau’s speed of play at the Omega Dubai Desert Classic, but it has dramatically heightened this year since the former controversially rolled his eyes up after the 2020 US Open champion walked past him in the background of an interview at the PGA Championship.

The pair’s feud has become rather bitter in recent times, with the duo trading barbs on social media and fans taunting DeChambeau with heckles of ‘Brooksy’ at tournaments on the PGA Tour heading into the Ryder Cup.

Headlines have been dominated by the American duo’s feud prior to the historic golfing event at Whistling Straits, with many fans from both the US and Europe fascinated to see how the pair will get on working together under Steve Stricker.

But revered golf instructor Harmon, who worked with Tiger Woods between 1993 and 2004, believes the whole scenario has been exaggerated by the pair, and claims they are both thriving off the attention.

When asked on his thoughts of them teaming up, Sky Sports’ Golf expert replied: “I’d put them together, I’d bash them up together, and say ‘look guys, get your head out of your a**, this is the Ryder Cup – forget all of the bull**** and lets go win a point.’

“It didn’t work with (Tiger) Woods or (Phil) Mickelson, but that was a different scenario. Those two guys didn’t even talk to each other.

“I think a little hostility on the team, in a Ryder Cup, is good. It brings more eyes to the TV, can you imagine if he puts these two together?”

While doubts certainly linger over how they will get on, they have tried to quash talk ahead of the Ryder Cup – which gets underway in Wisconsin with the foursomes format on Friday at 1:05pm UK time.

A video of the pair conversing at the driving range at Whistling Straits emerged earlier in the week, while DeChambeau has teased fans that “something fun” will be coming up at the Ryder Cup between the duo.

The two American’s will be key players for Stricker’s men if they are to reclaim the Ryder Cup, having been defeated in Paris in 2018 and losing nine out of the last 12 editions.

The US will be fired up to exact revenge, and with eight stars in the world’s top 10, will fancy their chances of glory on home soil.

And Harmon, who claims this will be one of the greatest Ryder Cups ever, insists that the US will need to “play with a chip on their shoulder” if they want to triumph.

“On paper, the American team looks a better team because of the world rankings, which means absolutely nothing when it comes to the Ryder Cup. We have also lost nine of the last 12. Just because it looks good doesn’t mean it will be good.

“Looking at these two teams, I really like them both. You look at the teams, they are all tournament winners, they are guys who are used to winning. The American team has to get their head out of their a****.

“They have lost nine of the last 12. And people say ‘do they care?’… well damn right they care, they don’t like getting beat. And they have to suck it up. The last one in Paris wasn’t even close.