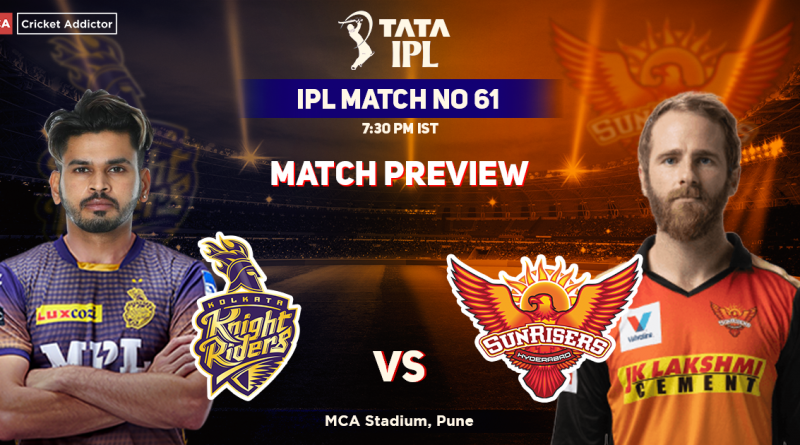 KKR vs SRH Match Preview, IPL 2022, Match 61 Kolkata Knight Riders vs Sunrisers Hyderabad. Kolkata Knight Riders (KKR) take on Sunrisers Hyderabad (SRH) in match 61 of IPL 2022 in Pune in a must-win game on Saturday, May 14. KKR and SRH both need to win all their remaining matches to give themselves a chance of making it to the playoffs. SRH beat KKR when the two teams met previously earlier in the season. Kolkata would look to have one back in the reverse fixture.

Gujarat Titans, LSG RR, and RCB are the top four teams at the moment. GT is the first team to make it to the playoffs this season. A total of 74 matches will be played across the four venues in Maharashtra in IPL 2022.

KKR brought out their A-game against Mumbai Indians in their last match. After being bowled out for 166 themselves, the Knight Riders bowlers bowled out Mumbai for just 113 to win the game by 52 runs. The win has taken them to the seventh spot in the points table. Kolkata Knight Riders would expect to replicate their performance in the game against SRH. They have to beat SRH to stay alive in the tournament. Losing to SRH would end their campaign.

SRH find itself in a rut at the moment. They lost their opening two games, won the next five on the bounce and have lost their next four on the trot. Their last win in the IPL came against RCB on April 23. They beat KKR in their previous meeting earlier this season. Like KKR, This match is a must-win for Sunrisers Hyderabad as well. Kane Williamson‘s lack of form has been a big concern. He needs to turn it around with the bat in the last three matches. A loss against KKR would end their campaign as well.