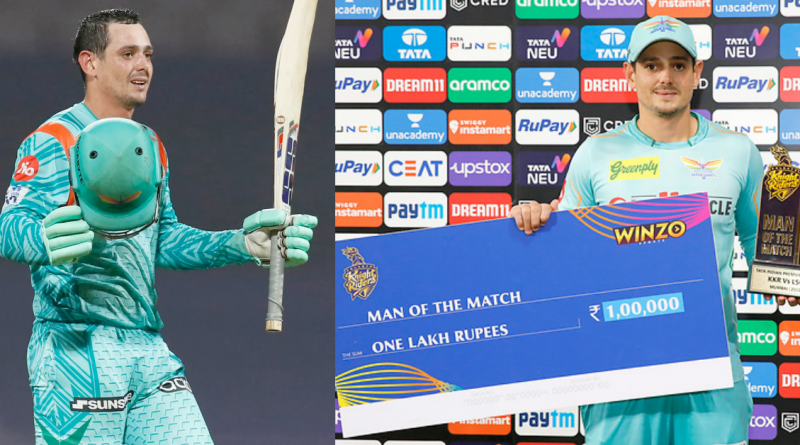 
The wicketkeeper-batsman Quinton de Kock won the Player of the Match award in the 66th match of the Indian Premier League (IPL) 2022 that was played between Shreyas Iyer-led Kolkata Knight Riders (KKR) and KL Rahul-led Lucknow Super Giants (LSG) at the Dr DY Patil Sports Academy in Mumbai on Wednesday, May 18.

Winning the toss and batting first Lucknow Super Giants were able to score 210 runs with the help of openers – KL Rahul and Quinton de Kock – who remained unbeaten till the very last over. Also, this was the highest ever opening stand in the history of the IPL and this was the first time a team had batted the entire 20 overs in IPL without losing a wicket.

Chasing the target, Venkatesh Iyer and Abhijeet Tomar got out in the powerplay itself. However, skipper Shreyas Iyer, Sam Billings and Nitish Rana played good knocks in middle. In the end, Rinku Singh and Sunil Narine’s batting masterclass almost took KKR past the finish line but they fell just 3 runs short of a victory.

I was a little bit cooked – Quinton de Kock

Player of the Match award winner Quinton de Kock, who smashed unbeaten 140 runs off 70 balls including 10 fours and 10 sixes, during the post-match presentation ceremony, said that he is happy to do well for Lucknow Super Giants. He also talked about his aggressive century celebrations. He said:

“I was a little bit cooked (after his innings) but it was a matter of getting some refreshments and get on with it I guess. It was a bit of frustration that came out (on his aggressive century celebrations). Felt really good to come out and do well. Was trying to keep it in, but when it came out, felt good.”

Quinton de Kock further said that he never thought that the match would be so close. He added that he thought Marcus Stoinis would defend the total easily but in the end, Evin Lewis’ catch helped them win the game. Quinton de Kock said:

“To be honest, not really (whether he thought the game would get so close). Obviously they played really well, assessed conditions well and came hard at us. I thought he (Stoinis) would defend it easily. But when the first three went, I thought the game was done for us. But that catch, turned things for us. As they say, good catches win matches.”