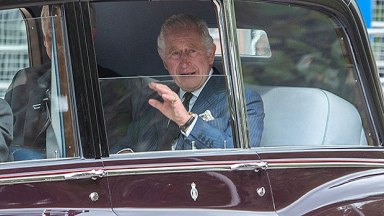 
King Charles III appeared overcome with emotion as he made his way to Buckingham Palace following the the Accession Ceremony at St. James Palace on Saturday (September 10) where he was officially declared Britain’s monarch. As he arrived in his state Rolls-Royce, Charles waved to the crowd who had gathered to catch a glimpse of the new sovereign as well as to pay their respects to his mother, Queen Elizabeth II, who passed away on Thursday her unprecedented 70 years on the throne.

The new monarch smiled through tears as he was greeted by well-wishers cheering, “God, save the king!” His wife, Camilla Parker Bowles, who is now called the Queen Consort, arrived an hour later to the same enthusiasm as she waved to the onlookers as well.

Two days after the death of his mother, Charles was elevated to the throne in an elaborate, centuries-old accession ceremony, which took place at St. James Palace and was broadcast live for the first time. “I am deeply aware of this great inheritance and of the duties and heavy responsibilities of sovereignty which have now passed to me,” Charles said at the event, before referencing the loss of the Queen. “I know how deeply you and the entire nation, and I think I may say the whole world, sympathize with me in this irreparable loss we have all suffered.”

British politicians, including the new Prime Minister Liz Truss, first met without Charles at the state apartments at St. James’s Palace for the Accession Council. The group confirmed Charles’ new title as King Charles III and then invited him into the ceremony, where he took his vows and began his duties as the monarch; one of which was to declare the day of his mother’s funeral a public holiday. The service is expected to occur on Sept. 19.

At the ceremony, which last took place in 1952 when Queen Elizabeth ascended to the throne, King Charles III was accompanied by his wife Camilla. Also in attendance was his eldest son, Prince William, who is now heir to the throne and called the Prince of Wales.

Meanwhile, outside Buckingham Palace, crowds were still gathering to pay their respects to Queen Elizabeth II, who died at Scotland’s Balmoral Castle. Her body will be brought from Balmoral to London, where she will lie in state at Westminster Abbey.

Queen Elizabeth Family Tree & Line Of Succession: Everything To Know About The Royal Line