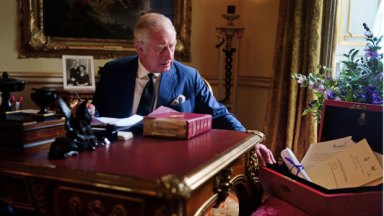 
King Charles III, 73, was already hard at work as the new monarch, in a new photo released on Friday. The son of the late Queen Elizabeth II, who died on Sept. 8, was sitting at a desk in Buckingham Palace as he reached for the official Red Box containing documents needing his attention, in the snapshot, which was taken on Sept. 11. The box holds the daily dispatch of papers from ministers around the U.K. and other places like Canada and Australia, of which he’s also King. It could also hold papers from representatives from the Commonwealth and other countries around the world.

A caption for the photo, which was released on the official Royal Family Instagram account, talked about the meaning of the Red Box, and additional photos of the Queen with her Red Boxes over the years, was also attached to the post. “His Majesty The King’s Red Box 🧰. The Red Box contains papers from government ministers in the UK and the Realms and from representatives from the Commonwealth and beyond,” the caption read.

“The documents are sent from the Private Secretary’s Office to The King, wherever he may be in residence, in a locked red despatch box,” it continued. “Her Majesty Queen Elizabeth received Red Boxes, which were made upon her Coronation in 1952, almost every day of her reign, including weekends and holidays, but excluding Christmas Day.”

The King was dressed in a suit, in the historical photo, and had a framed black and white photo of his parents placed behind him on a table. He was in the Eighteenth Century Room of the palace and appeared right at home as he sorted through the documents.

Just two weeks ago, Charles was declared the King of the United Kingdom after the Queen passed away “peacefully” at Balmoral Castle in Scotland. He was elevated to the throne in an elaborate, centuries-old accession ceremony, which took place at St. James Palace and it was broadcast live for the first time. The Queen was laid to rest alongside her parents and husband, Prince Philip, who passed away last year, on Sept. 19.