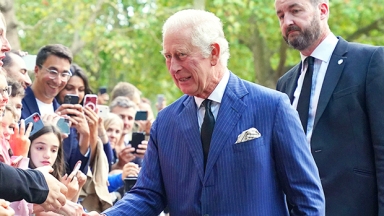 
Buckingham Palace has unveiled King Charles III‘s royal cipher. His monogram was revealed on Sept. 26, 16 days after he was officially declared king and 18 days after his mother, Queen Elizabeth II, passed away at the age of 96. The cipher will slowly replace Elizabeth’s and will appear on official state documents, government buildings, and the public red mailboxes that are around the United Kingdom, per People magazine. While the rollout will be gradual, all official mail leaving the palace will now proudly show Charles’ emblem starting Tuesday, Sept. 27, according to the publication. Photos of the emblem are available here.

The king’s cipher shows his initial, “C”, intertwined with the letter, “R”. The letter “R” is the initial for “rex”, which is the Latin term for “king”. Three lines are inside the upper loop of the “R” to represent that Charles, 73, is the third Charles in his family.  A crown floats above the letters to represent the English throne, while a crown that represents Scotland takes its place for a Scottish version of the cipher. King Charles and his wife, Camila, Queen Consort, have been staying in Scotland as they finish their mourning period for the queen.

King Charles reportedly chose the design himself out of several that were created by the palace’s College of Arms. He has already adopted his official signature, which is “Charles R,” the “R” once again symbolizing the Latin term for “king”.

Elizabeth’s cipher was similar and used an “E” and an “R” with a crown floating above. The letters were not intertwined and had “II” to represent that she was the second Elizabeth in her family between them. In her case, the “R” stood for “regina”, the Latin word for “queen”.

Charles’ cipher made its debut on the last day of private mourning for the British royal family. They previously had a period of public mourning which lasted from Sept. 8 to Sept. 19, the day Elizabeth’s remains were laid to rest at the King George VI Memorial Chapel at Windsor Castle. Queen Elizabeth is buried there with her late husband Prince Philip, who died in April 2021, her parents King George VI and Elizabeth the Queen Mother, and her younger sister, Princess Margaret.

On Sept. 24, King Charles’ first official portrait as king was released and showed him working in his office and reaching for documents in the official Red Box.

Queen Elizabeth II’s Grandchildren: Meet All Her Royal Grandkids From Oldest To Youngest