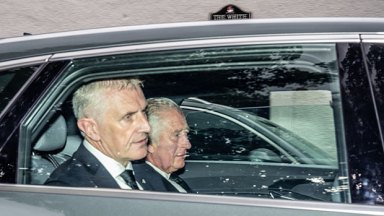 
King Charles III is mourning the loss of his mother, Queen Elizabeth II, but he also still has a job to do. After Queen Elizabeth passed on Sept. 8, Charles officially became the King of England, and he’ll have to address the nation about his mother’s death on Sept. 9. Although King Charles spent the night at Balmoral Castle in Scotland, where the Queen passed away, he was photographed heading back to the U.K. on the morning of Sept. 9. In the pictures, King Charles looked somber as he rode in the backseat of a car, which was headed to the airport. King Charles was joined by his Queen Consort Camilla, who was seated in the front and also appeared grief-stricken.

Following The Queen’s death at the age of 96, King Charles issued a period of mourning, which will last until seven days after her funeral. For now, a date for the funeral has not been confirmed. While King Charles headed back to the U.K. for his royal duties, the other senior royals — Prince William, Princess Anne, Prince Andrew, Prince Edward and Sophie, the Countess of Wessex — will remain at Balmoral for a “day of quiet reflection,” according to Buckingham Palace. Meanwhile, Prince Harry was already photographed at the airport heading back to London after The Queen’s death.

News about Queen Elizabeth II’s failing health was reported to the public on the morning of Sept. 8, when it was revealed that she was being kept under medical supervision at the recommendation of doctors. Just hours later, the Royal Family confirmed that she had died. “The death of my beloved Mother, Her Majesty The Queen, is a moment of great sadness for me and all members of my family,” King Charles said in a statement.

He added, “We mourn profoundly the passing of a cherished Sovereign and a much-loved mother. I know her loss will be deeply felt throughout the country, the Realms and the Commonwealth, and by countless people around the world. During this period of mourning and change, my family and I will be comforted and sustained by our knowledge of the respect and deep affection in which the Queen was so widely held.” With the note, Charles’ title was officially listed as “His Majesty The King.”