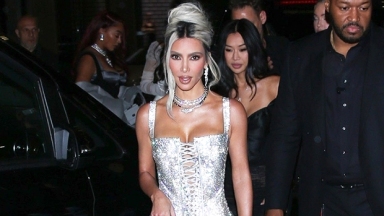 
Kim Kardashian, 41, loves a knockout look. And the star didn’t mind putting style over comfort after her big Milan fashion show with Dolce & Gabbana on Sep. 25. The beauty was almost immobilized by the sparkling platinum gown she squeezed into for the curtain call.

Kim’s dress was so tight she could barely move around, so clearly, BFF Stephanie Shepard, 33, had to capture her struggle on TikTok. There, she posted a video of the reality star struggling up a staircase, tiny hop by hop, and told followers, “I’ll let you caption this.”

I’ll let you caption this ⬇️

The SKIMS stunner could be heard asking, “Is there any elevator?” as she teetered up the stairs on stilettos during her tedious ascent. Once they made it to the car, Kim’s dress continued to complicate things. So tight she could barely move, the star was forced to lay flat as they drove off.

Kim was dressed to the nines for her big night with Dolce & Gabbana. There, she beauty promoted her archival collaboration with the Italian fashion powerhouses.

While Kim was busy with her big fashion show, her ex Kanye West hinted he was missing his ex-wife, who filed for divorce in Feb. 2021. Taking to his Instagram Story to react to news of Queen Elizabeth II’s early Sep. death, he shared, “London, I know how you feel. I lost my Queen too.”

Kanye seems keen on winning back his love. He apologized for the recent drama with Kim in a Sep. 22 interview with Good Morning America. Sending his sorries, he told hostess Linsey Davis.

“This is the mother of my children,” he said. “And I apologize for any stress that I have caused, even in my frustration, because God calls me to be stronger.” He continued, “I need this person [Kim] to be less stressed and of the best, sound mind and as calm as possible to be able to raise those children at the end of the day.”