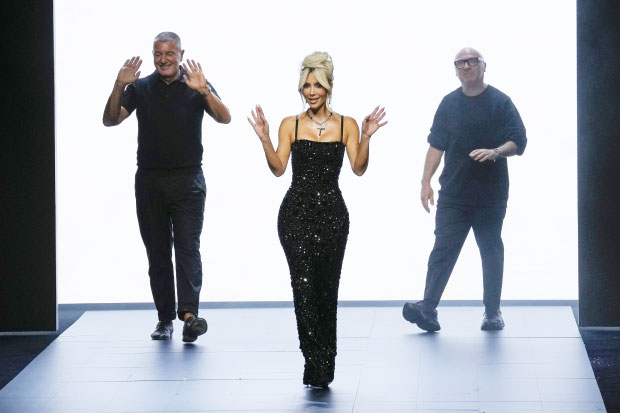 
Kim Kardashian closed Dolce & Gabbana’s Spring/Summer ’23 show in style. The Los Angeles native, 41, looked absolutely sensational in a tight black sequin gown with spaghetti straps as she waved to the clapping audience in Milan, Italy on Saturday, Sept. 24. After walking behind a set of opening black doors, she sashayed down the runway before being joined by designers Domenico Dolce and ‎Stefano Gabbana. She kept her blonde hair in a glam up do, accessorizing with just a silver cross necklace for the fashion show.

Momager and longtime D&G fan Kris Jenner took to social media to share a clip of the moment immediately after the show. “The most incredible show in Milan today!! @kimkardashian @dolcegabbana, perfection as always!” she 66-year-old grandmother exclaimed. “So proud of you @kimkardashian!!!” she sweetly added, shouting out her second-eldest daughter.

Kris was also in attendance at show in a white suit with a tie alongside daughter Khloe Kardashian, and grandkids North, 9, Saint, 6, and True, 4. Khloe, 38, also looked incredible as she wore the same strapless jeweled bustier and hot pants that Kim sported at sister Kourtney Kardashian‘s Portofino wedding back in May.

Just days before the appearance, Kim and D&G announced the buzzy new ‘Ciao, Kim’ campaign with the designers. The mom-of-four channeled the late Marilyn Monroe in a series of black-and-white videos as she experienced Milan (and the paparazzi), including dining on spaghetti while at dinner, as well as eating pizza in the back seat of a limo. Attendees of the show received various merch items featuring Kim’s face, including a scarf that came in a can a la tomato sauce, as well as a t-shirt with a black-and-white image of her.

A night before the show, Kim stepped out in Milan in yet another sexy look by D&G! Instead of sequins, she opted for a silver lamé jumpsuit with a bustier top and straight leg pants as she headed for dinner on Friday, Sept. 23. She opted to keep her blonde hair parted to the side and blown out, amplifying her glowing, nude-toned makeup.