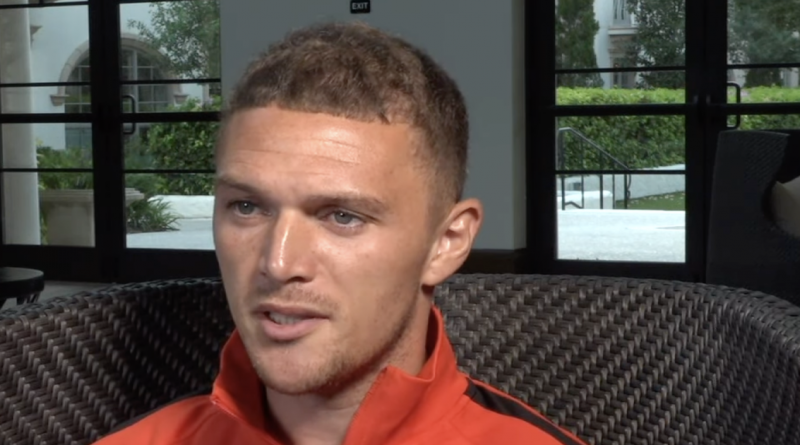 
Heavily linked with a move to Manchester United during the summer training window, Atletico Madrid full-back Kieran Trippier says he would “love” to return to the Premier League

Kieran Trippier has opened the door to a transfer to Manchester United with his telling admission.

The 31-year-old remained at Atletico Madrid during the summer transfer window amid heavy links with a move to Old Trafford.

Ole Gunnar Solskjaer was said to be keen on adding competition for first-choice right-back Aaron Wan-Bissaka, although the Red Devils had to be content with keeping Diogo Dalot at the club.

Trippier has now revealed, ahead of Atletico’s Champions League match against Liverpool on Tuesday, that he would “love” to play in the Premier League again.

AS claimed just days after the window closed the United ‘tried until the last minute’ to sign Trippier and Mundo Deportivo have recently reported that the former Burnley and Tottenham Hotspur defender was ‘clinging’ to interest from the Red Devils.

Trippier has played under some of the game’s best managers, including Diego Simeone in the Spanish capital.

Having won La Liga with Los Rojiblancos in his second season abroad last term, the England international says his Argentine boss, who was desperate to keep Trippier around over the summer, is a “winner.”

“Look at his record since he’s been at the club — eight trophies in 10 years. He’s relentless,” the Bury-born full-back told the Daily Mail.

“I’ve learned so much from him that will serve me as a player, or for when I move into a coaching career.”

Along with Simeone, Trippier has worked under Mauricio Pochettino and Sean Dyche, and he would be keen on reuniting with the latter on the pitch or in the dugout once he retires.

“Who knows at the end of my career, I could play for Dyche again and get a coaching role with him.”

It is, at least present, unlikely for Dyche to be named United manager any time soon, with Trippier’s immediate concentration on the clash with Liverpool at the Wanda Metropoolitano.

The defender was part of the Atletico side which beat the Reds over both legs of a round-of-16 tie with Jurgen Klopp and co in 2020.

Simeone’s side claimed a famous 3-2 win at Anfield in the second leg despite being under the cosh for most of the match.

“It was strange night because I think they had about a hundred chances,” Trippier explained.

“I was speaking to some of the lads before the game because I wanted to let them know how intense it was going to be.

“When Liverpool play at home, it really is 100mph.”

The game was played the day before the UK declared the beginning of the Covid-19 pandemic, and Trippier agrees with the general consensus of the occasion taking place when the virus situation was ‘out of control.’

“Looking back now, I don’t think it should have gone ahead. I didn’t realise it at the time as I was just focusing on the game.

“It’s after the match when I realised, ‘Yeah, this is getting out of control now’.”