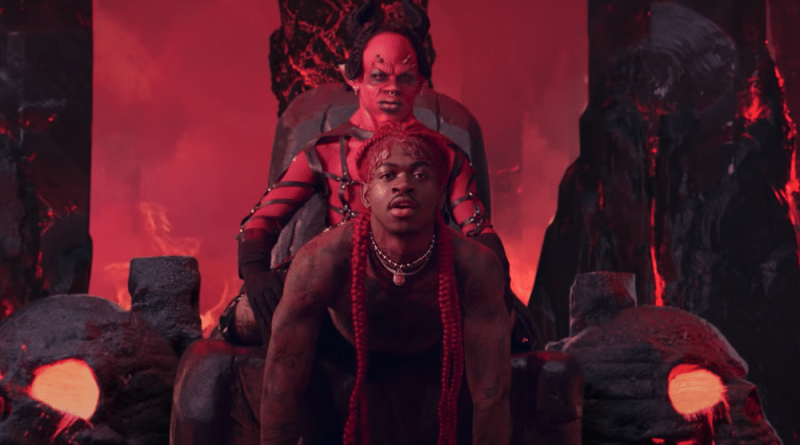 In the “Montero” video, Lil Nas X grinds on the devil, before becoming the new king of the underworld. (YouTube/ Lil Nas X)

Kidz Bop has inexplicably decided to cover Lil Nas X’s “Montero (Call Me By Your Name)”, a song about gay sex, and remove everything gay.

It has been frequently mocked over the last two decades for substituting “offensive” words with bizarre alternatives – see Lizzo’s iconic line: “I just took a DNA test, turns out I’m 100% that kid.”

But Kidz Bop may just have released its weirdest cover yet.

The kids music brand was forced to change almost every line of “Montero (Call Me By Your Name)”, a song exclusively about gay sex.

In the original song, Lil Nas X sings: “I wanna sell what you’re buying/ I wanna feel on yo’ ass in Hawaii/ I want that jet lag from f**king and flying/ Shoot a child in your mouth while I’m riding.”

In this version a child sings: “I wanna sell what you’re buyin’/ I wanna lie on the beach in Hawaii/ I want that jet lag from livin’ and flyin’/ Put a smile on your face whilst we’re dinin’.”

Hilarity ensued on Twitter over the Kidz Bop version of “Montero”, with Lil Nas X even tweeting the lyrics.

the kidz bop writers after changing the original lyrics to this shit pic.twitter.com/bZRyZDQwpu

While the song is undeniably funny, others pointed out that removing references to being gay suggested that LGBT+ people were somehow an “adult” topic.

I’m still shaking how kidz bop removed any sort of casual gay reference like “You live in the dark, yeah, I cannot pretend”

One TikTok user said: “They took out all references that the song is written about a man from the perspective of another man. I wonder why on earth they would have done that…?”

A Twitter user added: “I am, actually, as a queer person, VERY offended by the Kidz Bop version of “Montero”, which goes out of its way to make the song Less Gay ™ when the entire point of the song was Lil Nas X coming to terms with being forcibly outed by invasive paparazzi.”

Ok so the kidz bop version of Montero is the fresh historical senseless hell I was expecting, HOWEVER.. during the sanitisation of the song they also removed all references to being gay along with the drink, drugs & sex stuff. Proving that being queer in 2021 is still “adult”

Another said: “Ok so the Kidz Bop version of “Montero” is the fresh historical senseless hell I was expecting, HOWEVER during the sanitisation of the song they also removed all references to being gay along with the drink, drugs and sex stuff.

In its cover of Lady Gaga’s “Born this Way”, Kidz Bop completely removed the lines “don’t be a drag, just be a queen”, “lesbian, transgender life” and “no matter gay, straight, or bi”, not even bothering with substitutions.

At the time, the song even prompted a petition for the album to be pulled for “blatant gay censorship”.

“The censorship shown on Kidz Bop 20 is not acceptable and is a negative blow for LGBT+ kids,” the petition said.

“Editing a song to make it ‘gay-free’ does nothing but reinforce that something is wrong with them being gay. It will make kids feel ashamed of who they are.”