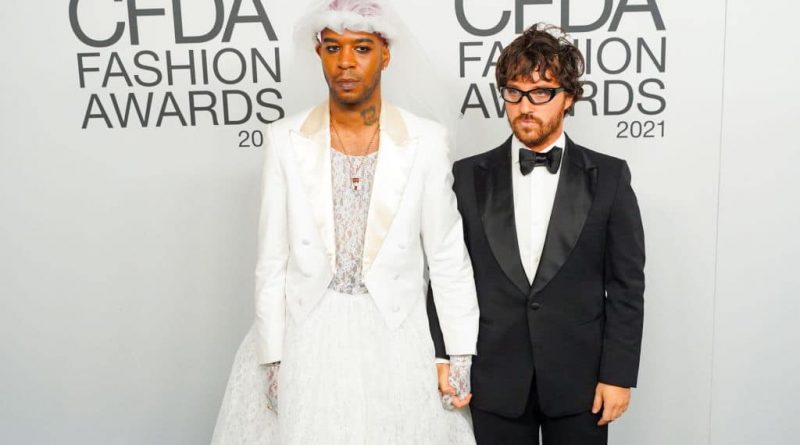 Kid Cudi is once again upsetting homophobes after he dared to wear a fabulous white wedding dress to a fashion awards ceremony.

The rapper has become well known for his fashion statements, and his latest outing to the CFDA Fashion Awards was a perfect opportunity for him to make a splash.

Kid Cudi turned up wearing a custom bridal gown designed by ERL, a “white-hot West Coast label launched in 2018 by American Emerging Designer of the Year nominee Eli Russell Linnetz,” according to Vogue.

To make the fashion statement even more dramatic, the designer himself accompanied Cudi to the awards ceremony, with the pair holding hands in front of photographers.

You would be forgiven for thinking that, in 2021, it shouldn’t be a particularly big deal when a man chooses to wear a dress – yet here we are.

One angry Twitter user, in a since-deleted tweet, said they deleted all of Kid Cudi’s songs from their playlist the first time he wore a dress.

“This guy is just trying to please certain people out there,” the furious Twitter user wrote. “I don’t see what the fascination is with men wearing women’s clothes.”

Another wrote: “He’s trying too hard now bro. I’m all for guys expressing themselves the way they want with their clothing, but this looks terrible.”

Another added: “When tf did Kid Cudi turn gay?”

Thankfully, the reaction wasn’t all negative – others took to social media to defend Cudi, with many pointing out that a straight man should be able to wear a dress without it causing controversy.

Some applauded Cudi for normalising people being able to wear whatever they want to. Others just wanted to heap praise on his style – because let’s be honest, Kid Cudi can really rock a wedding dress.

I love how Kid Cudi can wear a dress and absolutely rock that shit pic.twitter.com/4WTwxzERhU

BE YOURSELF, BE FREE BABY @KidCudi pic.twitter.com/WIF6hlRpbf

why do people act like kid cudi is the first man to ever wear a dress …. why does it bother u THAT bad ??? https://t.co/kp6sb5C0lq pic.twitter.com/gffbLinnXZ

people love to hate and that’s weird to me

This isn’t the first time Kid Cudi has worn a dress – he caused a stir in April when he performed wearing a floral dress on Saturday Night Live.

That moment prompted a wider discussion on social media about queerness and masculinity. Cudi later confirmed that the fashion choice was actually a tribute to Kurt Cobain, who wore a similar dress when he performed on the show in the ’90s. His wedding dress was also a tribute to the Nirvana frontman.

Cudi’s SNL dress prompted similar debate, and once again, many were quick to point out that the act of a straight man wearing a dress isn’t exactly groundbreaking.

As Munroe Bergdorf eloquently put it on Instagram: “As fab as it is to see cisgender straight men embracing femininity through fashion and all that it symbolises, let’s remember that they also won’t face nearly as much hatred or the physical danger that visibly queer folk will when they do the exact same thing.

“We can celebrate everyone’s expression and creativity, but we need to bear in mind that where some are applauded, others are literally being heckled and scared to leave the house because of transphobic and homophobic violence.”