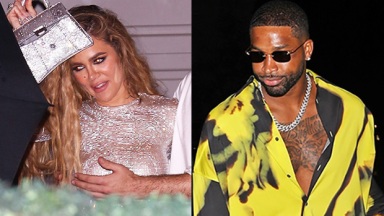 
Khloe Kardashian and Tristan Thompson were both in attendance at Beyoncé’s 41st birthday party, making for a potentially awkward run-in! The reality star, 38, and NBA player, 31, didn’t arrive together but were both photographed arriving for the disco themed affair in Los Angeles on Saturday, Sept. 10. The Good American founder was glowing as she stepped out of a vehicle before heading into the venue, sporting what appeared to be a sparkling silver gown. She continued to embrace the disco aesthetic (the theme of the party) with her blonde curly hair that was giving serious ’70s vibes.

Last December, court documents revealed that Tristan had conceived another child with Texas trainer Maralee Nichols. She gave birth to her child, a son named Theo, in Dec. 2021. The Kardashians on Hulu documented Khloe finding out about the news after older sister Kim Kardashian, 41, came across one of the initial news reports while at the gym — calling Khloe to inform her of the discovery. After a paternity test confirmed that Tristan was the father, he assumed responsibility for the child.

Khloe declined to publicly reveal that she and her ex were expecting another child, however, the Calabasas native confirmed reports in June after news began to circulate that she was about to become a mom of two. It’s unclear how the duo are proceeding to co-parent their son, however, the pair have both continued to remain actively involved with daughter True, 4, who they welcomed in April 2018.