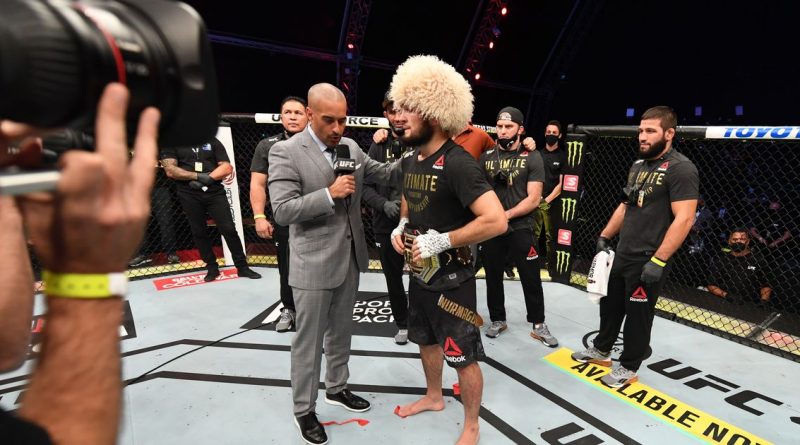 Khabib Nurmagomedov has explained why the thought of earning $100m for a boxing match with Floyd Mayweather didn’t appeal to him.

‘The Eagle’ says he promised his mother that he would not fight again following the death of his father and coach Abdulmanap Nurmagomedov.

Nurmagomedov improved to 29-0 after defeating Gaethje
(

“Of course money makes sense too. But I never fight for money. Money is good, but most of the time it is bad. Money brings you to the situation that you have never been, and you don’t know how to act when you have so much money.

“It is a little bit dangerous. In this business, I don’t come to make money. I come here for legacy.”

Nurmagomedov initially called for a fight with Mayweather shortly after submitting Conor McGregor at UFC 229 in October 2018.

“Let’s go Floyd. We have to fight now: 50-0 versus 27-0. We are two guys who never lose. [But] in the jungle there is only one king. Of course, I am the king because he cannot drop McGregor but I drop him easily. Let’s go,” he said.

Mayweather replied to Nurmagomedov’s call-out, stating: “CBS, Showtime and MGM Grand get the checkbook out!”

Nurmagomedov’s manager Ali Abdelaziz said talks were heating up about the fight, with UFC president Dana White even being on board.

“Listen, we got offered $100million to fight Floyd Mayweather. Dana White was on board, everybody was on board. But, you know, Khabib is an MMA fighter. If Floyd wanted to come to fight, get his little a** whooped, no problem.”

Mayweather retired from boxing in 2015 following his win against Andre Berto. ‘Money’ would return to the ring two years later to fight UFC superstar Conor McGregor, winning by stoppage to improve his flawless record to 50-0.

This past February, Mayweather fought internet personality Logan Paul in an exhibition fight. Although no winner was officially announced, Mayweather comfortably outlanded Paul in the fight.

Of that fight, Nurmagomedov said: “What’s there to say? They came out, made money. It’s purely business. There was no competitive aspect to it, old Mayweather came out, they sparred and made money – what else is there to say?”

Since retiring from professional competition, Nurmagomedov has purchased, rebranded and launched his own Russian-based MMA promotion, Eagle Fighting Championship (EFC).

He is also coaching fighter such as Islam Makachev and Usman Nurmagomedov at the American Kickboxing Academy.