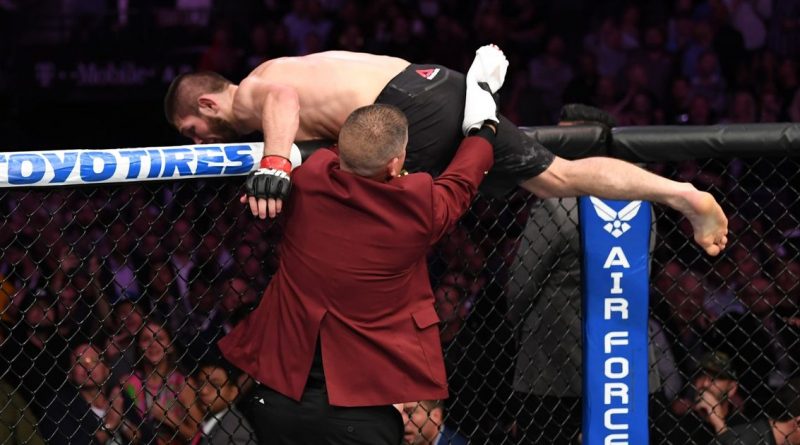 Khabib Nurmagomedov has explained why he jumped the cage and attacked Conor McGregor ‘s corner following his win over the Irishman at UFC 229.

Nurmagomedov defeated McGregor by fourth-round submission in their highly anticipated grudge match at UFC 229 in October 2018.

But what is most remembered about the fight is what ensued afterwards. A furious Nurmagomedov threw his mouthpiece towards McGregor’s corner and then lept the cage to attack Dillon Danis.

“Okay when I catch his neck and I choke him, he tap, you know, and I think, ‘Hey, you bring like thousand people from Ireland here, on different part of world and you tap in front of them and you talk about warrior or something like this,” he said.

“How you can tap? Go sleep, go sleep.’ And he tap and I was like, ‘Okay, it’s not enough. I need something.’ And I see, some of his corners talk with me and I think, ‘Oh, I have to bite his heart, you know.”

A scuffle then unfolded in the octagon between McGregor and Nurmagomedov’s cousin, Abubakar Nurmagomedov. Two of Khabib’s teammates then attacked McGregor as the chaos continued.

“The state of Nevada is where drugs, prostitution and gambling are officially permitted. Let them work on themselves.”

Nurmagomedov would go on to defend his UFC lightweight title against Dustin Poirier and Justin Gaethje after defeating McGregor, with both of those title defenses taking place in Abu Dhabi. He retired after his fight with Gaethje due to the death of his father, Adulmanap.

McGregor and Nurmagomedov’s rivalry has lived on since their fight. Last week, McGregor faced heavy scrutiny after seemingly mocking the death of Adulmanap in a now-deleted tweet.

After Nurmagomedov congratulated Poirier on his win over McGregor at UFC 264, stating: “Good always defeats evil”, the Irishman tweeted: “Covid is good and father is evil?”

McGregor is unlikely to make a return to the octagon until the summer of next year. ‘Notorious’ broke his left tibia in a trilogy fight with Poirier last month, handing Poirier his second win of the calendar year against McGregor.