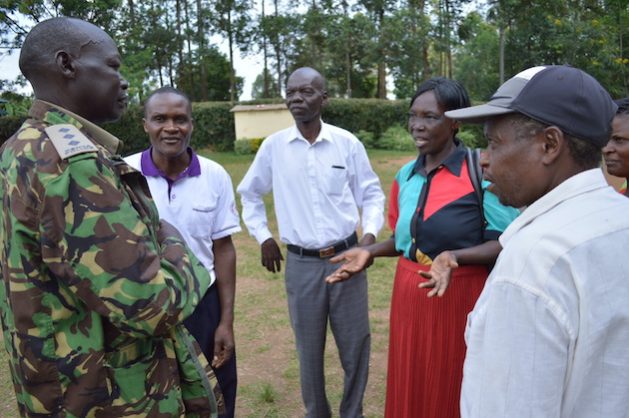 Nairobi, Kenya, Apr 13 (IPS) – Ahmed Bakari’s ill-fated journey to ‘greener pastures’ started with a social media private message from a stranger back in 2017. The message said an international NGO was recruiting teachers and translators to work in Somalia.

“I graduated with a bachelor’s degree in Communication in 2013. Other than for the odd job here and there, I was mostly unemployed,” Bakari tells IPS.

“My mother raised five of us single-handedly, and I was her hope. Taking loans to put me through university, but it was all amounting to nothing.”

With a starting salary of $500 and additional food and housing allowances, Bakari had no dilemma – he was going to Somalia.

Growing up in Lamu, a small group of islands situated on Kenya’s northern coastline, he knew that Somalia was not far from the border, and the journey there was uneventful.

Upon arrival in Somalia, he says, the unexpected happened. Bakari was taken to a house where he cooked and cleaned for between 10 to 20 men – without pay.

“I do not know what was going on in that house because they would come in and go at all hours. I lived under lock and key for one year. One day there was a disagreement among them, and a fight broke out. During the chaos, I found my chance to leave the house,” he recounts.

“I remained in Somalia for another six weeks until somebody helped me get to the Dadaab border. I crossed over into Kenya like a refugee because I was afraid of telling my story.”

Young people in Nairobi and Kenya’s coastal regions are particularly vulnerable to human trafficking into Somalia. Despite ongoing instability in the horn of Africa nation, many young people are lured with promises of opportunities to work in humanitarian NGOs and as teachers and translators.

Bakari, who now runs an eatery in Mombasa, says criminal groups are particularly interested in young people who can speak Arabic, Swahili, English and Somali.

“There was a time when the Pwani si Kenya (Swahili for ‘coastal region is not Kenya’) was gaining traction as a backlash campaign against the national government. These are the emotions that terror groups are happy to stir and exploit,”  Mahmud says, adding they also take advantage of the high levels of youth unemployment.

According to the most recent census released in 2020, youth unemployment is a serious issue in Kenya. More than a third of Kenyan youth aged 18 to 34 years are unemployed, and the situation has worsened since COVID-19.

The US Department of State 2021 Trafficking in Persons Report finds that the government of Kenya does not fully meet “the minimum standards for the elimination of trafficking but is making significant efforts to do so.”

These efforts include the Counter-Trafficking in Persons Act of 2010, which criminalised sex trafficking and labour trafficking and prescribed penalties of 30 years to life imprisonment, a fine of not less than $274,980 or both.

The government also allocated $183,320 to the National Assistance Trust Fund for Assisting Victims of Trafficking in 2020-2021.

For years, Al-Shabab has operated clandestine bases in Somalia just across Kenya’s eastern border, enabling the terror group to expand its operations into Kenya and other East African countries.

“From my experience, they will befriend you and some of your friends and relatives on social media. You will feel safe because you have friends in common. They will even tell you that you grew up in the same neighbourhood years ago. You end up trusting them very quickly and getting involved with them without asking the right questions,” Bakari cautions.

Mukaru Muthomi, a police officer with the National Police Service, says that in 2019, Kenya banned trade between Kenya and Somalia through the Lamu border due to insecurity and combat criminal activities such as existing networks and syndicates dealing in human trafficking.

The Lamu border crossing is one of four that join Kenya and Somalia, and other border points are in Kenya’s Mandera, Wajir and Garissa Counties.

He says the government is vigilant along the Dadaab and Mandera border point routes used by Somali refugees crossing into Kenya. Kenya hosts more than 500,000 refugees from Somalia.

Mahmud says human trafficking is a pressing issue in Kenya partly because criminals are increasingly taking advantage of the large numbers of refugees from Ethiopia, Sudan, and Somalia to complicate the country’s fight against human trafficking.

Nevertheless, Kenya’s Trafficking in Persons Report shows the country’s investigative capacity of the Anti-Human Trafficking and Child Protection Unit is gradually increasing. Personnel increased from 33 to 37 officers deployed in human trafficking hotspots. There are 27 officers in Nairobi and 10 in Mombasa, with plans to open a third office in Kisumu.

“Increasing personnel is good, but the government must address the root of these problems because human trafficking into and out of Kenya is interlinked with poverty. Find job opportunities for young people,” Mahmud observes.

The census, he says, showed that “3.7 million young people between 18 and 34 years without a job were not even actively looking for work because they have no hope of finding employment in Kenya. This is a ticking time bomb.”

This article is part of a series of features from across the globe on human trafficking. IPS coverage is supported by the Airways Aviation Group.

The Global Sustainability Network ( GSN ) http://gsngoal8.com/ is pursuing the United Nations Sustainable Development Goal number 8 with a special emphasis on Goal 8.7, which ‘takes immediate and effective measures to eradicate forced labour, end modern slavery and human trafficking and secure the prohibition and elimination of the worst forms of child labour, including recruitment and use of child soldiers, and by 2025 end child labour in all its forms’.

The origins of the GSN come from the endeavours of the Joint Declaration of Religious Leaders signed on 2 December 2014. Religious leaders of various faiths gathered to work together “to defend the dignity and freedom of the human being against the extreme forms of the globalization of indifference, such as exploitation, forced labour, prostitution, human trafficking”.