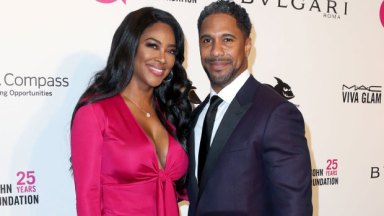 
Kenya Moore, 51, is not officially single quite yet! The RHOA star told Andy Cohen, 54, that she is still legally married to her former partner, Marc Daly, after she filed for divorce in May 2021. “He’s not asking for anything at this point. It’s just at a standstill. So until we get a trial date or settle, it’s still going to go on,” Kenya said during the show.

But despite the ongoing divorce, Kenya made it clear that she is single and ready to mingle! “I’m definitely doing some group dating and have people pursuing me, but nothing serious yet,” she said.  Kenya also told Andy that her friends are trying to set her up! “People are flooding me with, ‘Hey, my friend wants to meet you,’ guys reaching out. I just have that energy right now,” she added.

The mom-of-one’s separation first took place in September 2019, according to Radar. Kenya and Marc were married on June 10, 2017, and called it quits after two years of marriage. But soon after their first split, the couple was working on reconciling before Kenya decided a romantic reunion was no longer in the cards. In May 2020, she told HollywoodLife about her and Marc’s future plans. “I’m just taking one step at a time. We have a lot of work to do and whether or not our marriage survives and everything, it’s only God that knows that.”

Since their second breakup, the Kenya Moore Hair Care founder wanted to break free of her former relationship for good. During a May episode of Watch What Happens Live, she told Andy that, “I feel like it’s been going on for years too,” Moore said in regards to the divorce. She then added, “Get me free! Get me free!”

Marc and Kenya share a daughter, Brooklyn Daly, 3, together. During the initial COVID-19 quarantine of 2020, the Miss USA-winner told us how she was co-parenting with her ex. “We have been doing great,” Kenya said. “He’s in New York. We FaceTime him every day. Co-parenting is amazing,” she added. But by May 2021, things clearly took a turn, as the TV personality also requested to get “sole custody” of her daughter from Marc. Then in June of that year, Marc also responded with his own request for “joint legal custody” , and still noted that he was okay with Kenya having “primary custody.” At the time of publication it remains unclear where the former couple have left off in regard to a custody agreement.