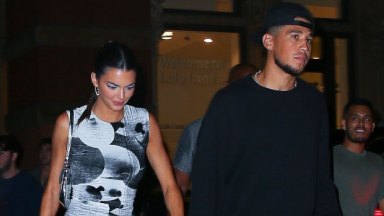 
Kendall Jenner and Devin Booker are certainly back on and stronger than ever! The superstar couple — who recently reconciled after splitting in June — were spotted getting cozy with each other at a New York Fashion Week after party on Friday night (September 9). Rocking an incredible black-and-white dress, the stunning model held hands with her NBA star beau, who kept it cool in an all-black ensemble and backwards-facing baseball cap.

The outing comes after several romantic dates by the picture-perfect pair. Since getting back together, Kendall and Devin have been spotted at a few parties and dinners looking like they picked up right where they left off in June, when they quietly ended their very private two-year romance.

Back when the split was announced, a source EXCLUSIVELY gave HollywoodLife the 411, and it sounds like Kendall called it off because Devin wasn’t “as serious as she was” about their love match. “Devin is very upset about the whole thing and he definitely hasn’t even begun to move on,” the source began. “Kendall broke up with him because she didn’t think he was taking the relationship as seriously as she was. Kendall felt like it was a really big deal to bring him with her to Kourtney’s wedding and she thought it would be super romantic. But it didn’t turn out like that at all, and he couldn’t have seemed more disconnected from the love and romantic aspect of it.”

Another source EXCLUSIVELY told HollywoodLife that the subject of having kids came into play during the breakup. “Kendall does love Devin, but she does not feel like they are on the same page in terms of their feelings for each other and in terms of what they ultimately want out of a relationship. All of Kendall‘s sisters (and brother Rob even) have children now and Kendall is the only one that is still not even close to getting there. This just makes her feel slightly like the odd one out. Her mom and sisters are always asking her, ‘So when are you going to have children?’ Her answer is always the same, which is that she doesn’t know.”

Kendall Jenner’s Boyfriend: All About Her Ex Devin Booker & Their Heartbreaking Split