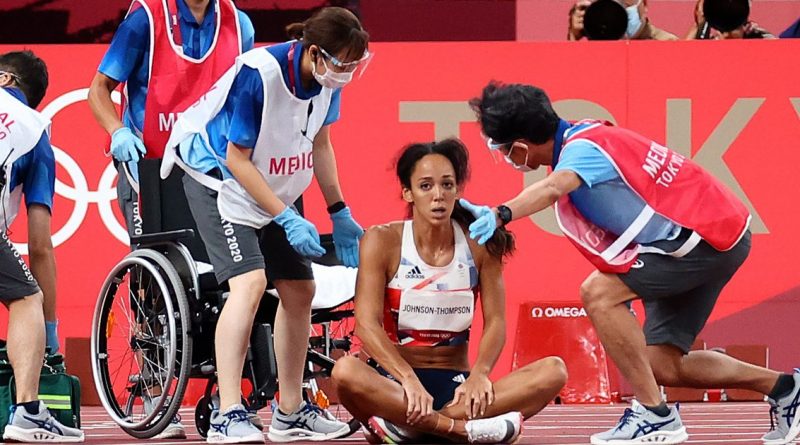 Eleven hours after her smile lit up Tokyo they came for Katarina Johnson-Thompson with a wheelchair.

She lay on her back clutching her head in her hands as pain throbbed through her right leg.

Britain’s world champion had vowed to win the Olympics or to die trying and by the time they reached her she knew which it was to be.

But she was not prepared to be carted off out the back in a meat wagon. If it had to end this way she was going to leave through the front door.

Johnson-Thompson got to her feet with a grimace and began hopping towards the 200 metres finish line, Derek Redmond minus his dad.

Athletes who had begun the day as rivals waited to wrap her in their arms. And then, just like that, her Olympic dream was gone.

“Someone’s heart has been trashed on the track,” heptathlon great Denise Lewis said. “It will be hard for her to come back from this emotionally.”

But Lewis insists she will and undoubtedly that is true because Johnson-Thompson did not become champion of the world by taking an elevator to the top.

She got there via the north face of the Eiger.

All smiles: Kat after making a blistering start in her first event, the 100m hurdles
(

Just making it to these Games had required a supreme effort. And when she exploded out of the blocks at first light it seemed the hard work to get back from a ruptured Achilles had paid off.

The surgery, the three months out of training, the painstaking return to limited competition, all appeared to have done the trick as she opened up with the second fastest 100m hurdles of her life.

She did not need the time of 13.26secs to flash up to be happy. Feeling great was all the validation required.

The Liverpudlian showed no signs of discomfort in the sprint hurdles
(

When she then cleared 1.86 metres in high jump followed by a shot put of 13.31m, the second best of her life, she was 200m from finishing the day in one piece.

That quickly became 100 as she flew off the bend before, suddenly, grimacing and going down, as if taken out by a sniper.

Tracks of my tears: Adam Gemili (above) and Dina Asher-Smith (below) also suffered injury heartbreak in Olympic Stadium
(

“Utterly devastating for Kat,” said Jess Ennis-Hill. “The years she has had in the sport, she has had so many lows.

“It’s so unfair she is in this position again. She has been such a victim of the past 18 months.”

By hobbling to the line it seemed Johnson-Thompson wanted to keep alive the faintest of hope that she might recover sufficiently to complete the three remaining disciplines today.

Denise Lewis: “Someone’s heart has been trashed on the track”
(

But before confirmation arrived that her injury was a damaged calf in her right leg rather than a recurrence of her Achilles problem in the left, came another statement.

That she had been disqualified for leaving her lane. Cruel really doesn’t begin to cover it.