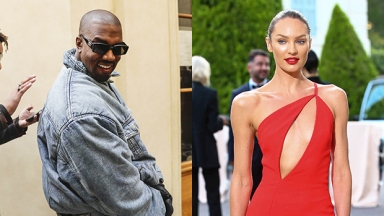 
Kanye West certainly knows how to add fuel to a rampant rumor about his dating life! After the “Famous” rapper was seen getting flirty with Candice Swanepoel, he took to his Instagram Stories late on Thursday night (September 15) to share an artistic image of the South African supermodel. In it, the Victoria’s Secret Angel is striking a pose while Kanye holds up his phone to snap a picture. The filter used makes the cute pic look a bit futuristic, an aesthetic Kanye loves to use in his fashion line.

The photo appears to be taken at the Yeezy GAP sunglass event at New York Fashion Week earlier this week, where the pair first sparked romance speculation. Kanye and Candice, who is featured in advertisements for the YEEZY GAP sunglasses, were reportedly acting quite chummy with each other at the event before hopping in his SUV to go back to his hotel together.

While its unclear if the pair are an item, Kanye has certainly been linked with a few ladies recently that are not his ex Kim Kardashian. After reportedly breaking off his fling with Chaney Jones in June, the “Famous” rapper was seen at celebrity hotspot Giorgio Baldi in Santa Monica with a mystery woman on Friday. The pair looked to be chummy with each other as they left the famous eatery. All this came after Kanye was hanging out with actress Julia Fox for a hot second at the beginning of 2022.

Meanwhile, Kim is back on the market after calling off her nine-month romance with Pete Davidson. A source EXCLUSIVELY told HollywoodLife that Kim is “single and ready to mingle” but she’s not looking to rush into any new relationship. “Love takes time and right now Kim doesn’t have the time to invest in anything serious. So, while she focuses on her billion-dollar empire, including the launching of her new ear pods brand, she is going to have fun. If this includes going on dates, so be it. But she is way too involved with her family and focused on herself right now to give away too much of this to anyone else.”