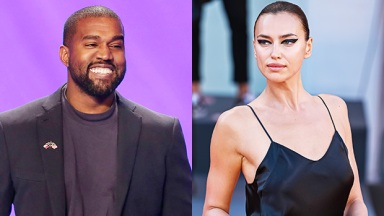 
Kanye West greeted his ex-girlfriend Irina Shayk sweetly, as they were hanging out backstage at the Burberry fashion show in London on Monday, September 26. The “Bound 2” rapper, 45, looked like he was enjoying his brief chat with Irina, 36. As Yeezy gave her a hug, the model could be heard saying, “I’ve got you,” and it seemed like the two were having a good time reconnecting.

Irina walked the runway, and she looked absolutely gorgeous in a black strapless gown with a bow-design on the back from the upcoming collection by Riccardo Tisci. While the model sported the new piece, Ye was dressed pretty low-key. He rocked a leather jacket and pants, as well as a black hoodie for the event. The video also featured the rapper greeting other famous pals, including Bella Hadid and Erykah Badu.

Kanye and Irina have a long history together, from her first appearing in one of his music videos back in 2010 and modeling for his Yeezy line, but it was revealed that the two had taken a step in the romantic direction in June 2021, when it was revealed that Ye had invited her on a getaway to France.

Despite the rapper and model seeming to have had a good connection, their relationship fizzled out after only two months. The couple split up in August of 2021, and sources revealed to different outlets that they just weren’t a compatible match, and they hadn’t been very serious to begin with. Even though the relationship didn’t work out, the two seem like they’re still good friends, during the hug in the video.

Since the split, both Kanye and Irina have seemed to have moved on. The Yeezus rapper has had a series of relationships since their split, but most recently he’s been reported to be dating Candice Swanepoel, 33. While Kanye appears to have sparked a new romance, Irina is reportedly considering rekindling an old one. After a family vacation with her ex Bradley Cooper, 47, and their daughter Lea, 5, a source revealed that they’re considering getting back together to Page Six. Irina and the A Star Is Born director had been together from 2015 to 2019, and they continue to co-parent their daughter together. While them getting back together is not confirmed, they’ve been seen spending time together with Lea earlier in September.