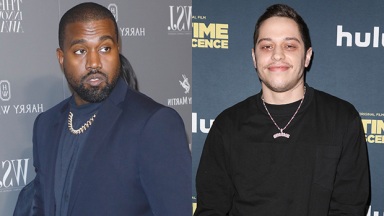 
Kanye West, 45, resumed his social media attacks against Pete Davidson, 28, on September 1. Ye took aim at the comedian’s decision to get a tattoo related to Kanye and Kim Kardashian‘s four children prior to his split from the reality star. “Ask Pete how those tattoos of my kids doing in the trauma unit,” Kanye wrote on Instagram in white letters across a black background. He’s since deleted the post.

Pete debuted his tattoo for Kim and Kanye’s children back in April as he left one of his stand-up shows. The neck ink read, “KNSCP,” which are the first letters of the names of Kim and her children North, 9, Saint, 6, Chicago, 4, and Psalm, 3. Pete also got several tattoos to honor Kim, including the words “My Girl Is A Lawyer” inked on his chest. “Yeah, he has a few tattoos — a few cute ones, you know, that he got,” Kim gushed to Ellen DeGeneres in early April. “I think my favorite one, it says [pointing to her collarbone]…My girl is a lawyer,’ and that one’s really cute,” she said, referencing her law studies.

Kim and Pete dated for seven months after she hosted an episode of Saturday Night Live in October 2021. News of their split broke on August 5 but neither person has addressed the breakup in public. Kanye was never a fan of the relationship and even mocked their breakup on Instagram. The rapper shared a fake New York Times front page article with a headline reading, “SKETE DAVIDSON DEAD AT AGE 28.” HollywoodLife learned from a source that Kim was “furious” with her estranged husband and “demanded” he delete the post shading Pete, which he did.

Kanye released so many scathing posts on his Instagram September 1. He went after Kim for their parenting differences, before sharing an alleged message he received from his former mother-in-law Kris Jenner, 66, via Kim. “Tell him to please stop mentioning my name. I’m almost 67 years old and I don’t always feel great and this stresses me to no end,” the text read. It has not been confirmed that the texts were actually written by Kim and Kris. HollywoodLife has also reached out to the Kardashians rep for comment.

Also, Kanye made shocking comments about Tristan Thompson, Travis Scott, and Scott Disick, calling them fellow “c– donors” because they, too, have made kids with women in the KarJenner clan. Ye seems to have slowed down with the social media attacks, but we won’t be surprised if he keeps it going again.