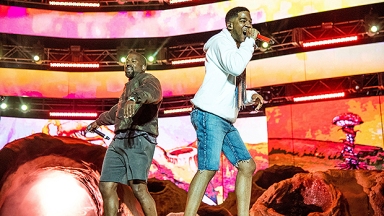 
Don’t expect to see Kanye West and Kid Cudi sharing the stage anytime soon. Yeezy, 45, took a shot at Cudi, 38, in his latest Instagram post attacking Adidas CEO Kasper Rørsted on Thursday, September 1. Under a fake New York Times headline declaring the CEO dead (similar to what he did when Pete Davidson and his ex-wife Kim Kardashian split up), he also included a diss directed at the “Pursuit of Happiness” rapper.

The fake headline came amid Kanye’s recent public feuding with Gap and Adidas, where he’s called out both companies on Instagram. The headline went after the Adidas CEO, but the fine print had the diss at his former pal. “Kasper Rørsted also dead at 60,” he wrote. “I know what you’re thinking… who is Kasper? but even less importantly who is Kid Cudi?”

Kanye has teased that he’d be opening “Yeezy Stores” in response to the disses. While it’s not clear what Kasper has done to merit the false headline from Ye, it may be a reference to the fact that the CEO is planning to step down from his position in the next year, per Complex.

The “Runaway” rapper claimed that he’d cut Cudi from his album Donda due to his friendship with Pete Davidson, who was dating Kanye’s ex-wife Kim Kardashian at the time. Kanye had announced that the Man on the Moon star would be absent in an Instagram post in February. “Cudi will not be on Donda because he’s friends with you know who,” he said.

The two rappers notably released the record Kids See Ghosts together in 2018. Even though they were once super close, it seems that the two have had a serious falling out over Cudi’s friendship with Pete. After both rappers guested on a track for Pusha T, Cudi clarified that he and Ye were not on good terms. “I am not cool w that man. He’s not my friend,” he tweeted. He further clarified why he’s not planning on buddy-ing back up with the My Beautiful Dark Twisted Fantasy rapper soon either in an August interview with Esquire. “I’m not one of your kids. I’m not Kim. It don’t matter if I’m friends with Pete [Davidson] or not friends with Pete. None of this s*** had anything to do with me,” he told the magazine.