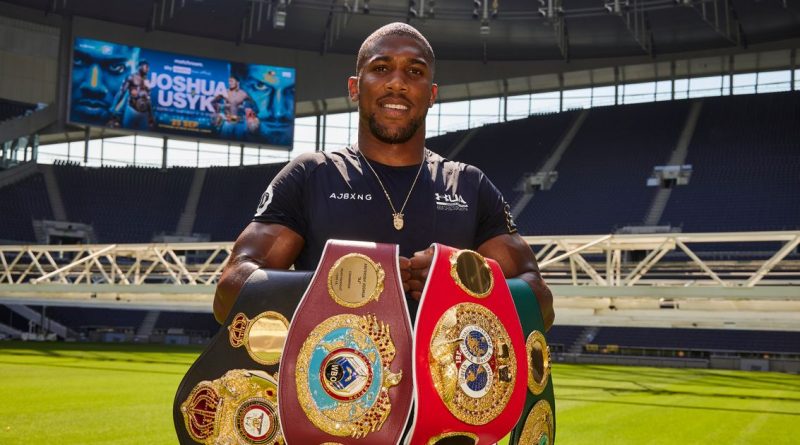 
Joshua defends his world titles at Tottenham Hotspur Stadium on Saturday against challenger Usyk, who has fought just twice since moving up to the heavyweight division

Anthony Joshua has warned challenger Oleksandr Usyk he may be in over his head.

Usyk will take on Joshua at the Tottenham Hotspur Stadium on Saturday night after just two pro fights at heavyweight.

Joshua says the unbeaten former undisputed cruiserweight world champ is taking a gamble by fighting him when he has relatively little experience at heavyweight.

He feels Usyk has “jumped in at the deep end” and says Saturday will be sink or swim time.

“He’s done well at heavyweight,” said the unified WBA Super, IBF and WBO champ. “The difference is when say Evander Holyfield came up to heavyweight, I think he had six fights at heavyweight before he fought for the championship belt. That was against Buster Douglas.

“Usyk’s fought two heavyweights. He’s obviously had the experience of fighting at heavyweight in the World Series of Boxing when he was an amateur, but he’s jumping in at the deep end early on.

“But good luck to him, he must believe in himself. He wants to be at the top end early.

“You might as well jump in the deep end and try to survive.”

Usyk, 34, has earned his shot by beating Derek Chisora to become the WBO’s mandatory challenger.

Although his only other win at heavyweight was against Chazz Witherspoon, the Ukrainian is hugely experienced and had 350 amateur fights, including winning 2012 Olympic gold at heavyweight, before turning pro at 26.

He won his first world title at cruiserweight after just 10 fights and became the undisputed champion in his 15th.

But Joshua insists he has entered his territory.

“The two intros at heavyweight for him were good opponents to pick, credit to him,” he said.

“But this is heavyweight boxing and I’m the heavyweight champion of the world. I don’t play games. I’m here to win.”

Usyk has fought just twice at heavyweight as a pro
(

Usyk will only be Joshua’s second fight since winning back his world crowns from Andy Ruiz Junior in December 2019 and he says he could continue fighting until he is 40.

Joshua turns 32 next month and says he has no plans to quit like rival Tyson Fury, who says he could retire after five more fights.

“Thirty-six to 40 is when I start making decisions in terms of what I do with my career. I turn 32 in October so I’ve still got some good years ahead of me.”

Manny Pacquiao confirms retirement from boxing ahead of running for president