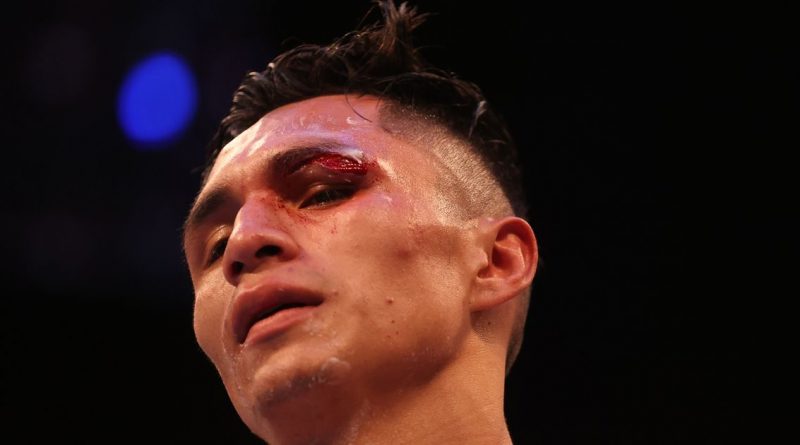 
Warrington looked impressive in the first two rounds, but after a clash of heads left Lara badly cut, the fight was stopped after just six minutes and called a “technical draw”

Josh Warrington’s hopes of avenging his shock loss to Mauricio Lara ended in controversy when the fight was called off after just two rounds.

Lara suffered a nasty cut above his left eye in a clash of heads and the doctor ruled the Mexican was unable to continue.

Warrington and his fans could not believe it and the contest was ruled a technical draw because fewer than four rounds had elapsed.

Warrington must now hope promoter Eddie Hearn can arrange a third fight between them as he bids to avenge his first pro loss and get his career back on track.

The ending was a huge anticlimax for the 20,000 fans inside Leeds’ Headingley Stadium and they had turned up hoping to see their hometown hero win.

Warrington was on top after the two rounds and had started well. But now he must return to the gym and wait for his next chance to fight.

After losing to Lara behind closed doors at the SSE Arena, Wembley, in February Warrington was clearly fired up by his home crowd and landed a right hand in the first before he unloaded on his opponent on the ropes.

Warrington was aggressive and he cut Lara above his left eye with his head as he lunged forward.

Referee Steve Gray told each of the three judges at ringside that the cut was caused by a clash of heads rather than a punch and Lara stood stunned for several seconds.

He finished the round and returned to his corner, where they frantically tried to work on the bad cut.

Blood was coming from the wound and Lara’s corner were still trying to patch him up when the bell sounded for start of the third round.

Gray inspected his cut in the corner with the doctor and waved the contest off to the huge disappointment of Warrington and his fans.

That was an unsatisfactory end to the night’s boxing and earlier Conor Benn beat Adrian Granados by a unanimous points decision to retain his WBA Continental welterweight title, but he could not make the emphatic statement he wanted.

Benn was frustrated by Granados’ unwillingness to engage and the Mexican spent most of fight impersonating Jason Kenny by back-pedalling around the ring.

Benn’s annoyance boiled over and near the end of the final round when he stood in the middle of the ring and screamed “come on!”.

Katie Taylor was made to work by Jennifer Han before winning by a unanimous points decision to retain her women’s undisputed world lightweight title in her dad Pete’s home city.

Han frustrated Taylor for parts of the fight before Taylor cut loose and put her down in the eighth with a right-left combination.