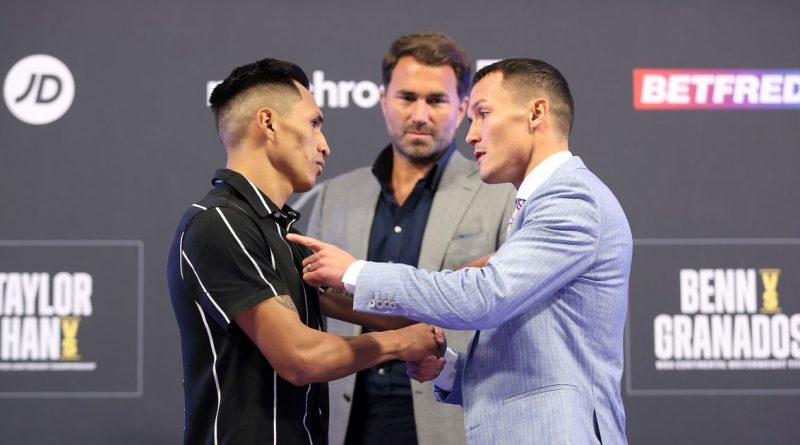 
Warrington has revealed he has spoken to Joshua about his successful revenge mission against Andy Ruiz, and is ready to complete his own turnaround against Lara after a devastating stoppage

Josh Warrington has compared his revenge mission to Anthony Joshua’s successful overhaul of Andy Ruiz ahead of his second duel with Mauricio Lara.

The ‘Leeds Warrior’ suffered a devastating first career defeat against rugged Mexican Lara back in February, as he was outclassed by the power of his opponent in a behind-closed-doors affair.

And the popular featherweight has been plotting his revenge ever since, immediately accepting a rematch with a full capacity crowd of 20,000 expected in his hometown Leeds.

With high stakes in the rematch Warrington has compared his mission to Joshua’s second fight against Ruiz, and admits after conversations with the heavyweight, he wants to “follow in his footsteps.”

“When AJ got his revenge against Andy Ruiz that was it and done, and I want to do the exact same thing this Saturday and it is all business,” Warrington said at a press-conference.

“I could have had a ten rounder, but it will make my toes curl if I watched someone else fight Mauricio Lara, but I have been at a high level and a higher level than what he is (Lara).

“I wanna follow the footsteps of AJ and get it done and continue my journey.

“I am looking to put it right on Saturday night and start a new chapter, and I can’t wait to redeem myself.

Warrington has fought the likes of Carl Frampton and Kid Galahad already during his illustrious career and wants to return to the heights of his world champion status.

But he has acknowledged that there is no “personal animosity” between him and his opponent this weekend, with any comments made with a focus on “business”.

“I take him seriously, there was no fear in my eyes I looked straight through him.”

“I was too sure of myself, but there is no personal animosity between Mauricio, the only comments I have made have been about my own dad maybe calling him a w***** from time to time.

“I take Lara massively seriously, I didn’t think he could bring what he delivered and that was my mistake but I won’t make that same mistake again.

“Having the crowd there, they are my second wind, they are my twelfth man and they are my little bit of advantage. It is going to be special to walk out at Emerald Headingley.”

Warrington’s opponent was relatively unknown going into the first fight, but he proved his credentials despite already having two defeats on his record.

And Lara is determined to pull off another huge “knockout” despite admitting he is fully prepared for a slug-fest.

“I have prepared one thousand percent and I know previously that people didn’t know me but they will do now and it will be the same outcome on Saturday night,” Lara said.

“I have also prepared for twelve rounds, but I can assure you it won’t go the distance.”

Talented welterweight Conor Benn also features on the card, and has recently opened up about the “devastating” cancellation of his Fight Camp appearance against scheduled opponent Adrian Granados.