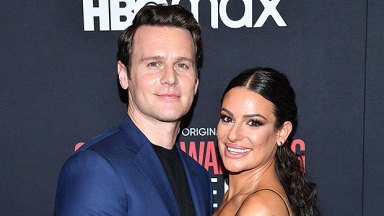 
Jonathan Groff, 37, shared the words of encouragement he texted to bestie Lea Michele, 36, the morning of her Funny Girl debut on Broadway. “I was texting that morning, I was driving up from Pennsylvania where I live, my mom and I were coming up to see her,” he told HollywoodLife EXCLUSIVELY at Disney’s D23 Expo in Anaheim, California, on September 9 as he was reuniting with his former costars. “And I said, ‘it feels like Christmas morning.’ And we FaceTimed the night before, and I said, ‘it feels like Christmas Eve’, like when you’re in anticipation of the big day,” he continued. The Glee actor added that the night of the show, “we watched a girl become a woman in front of our very eyes.” Funny Girl is a musical on Broadway by Isobel Lennart. It has returned to Broadway only a few times and most recently starred Beanie Feldstein, 29, who Lea replaced this year.

Lea made her debut as Fanny Brice on the Broadway stage on Sept. 6 and captivated the audience, as she received more than four standing ovations for her performance, Deadline reported. That night, a fan shared a video of Jonathan standing and applauding his former Glee costar while she seemingly pointed at him from the stage. He bowed and covered his mouth in astonishment during the adorable clip.

The new Funny Girl star took to Instagram on Sept. 7, to thank all of her supporters and celebrate the evening. Lea wrote, “I want to say thank you whole heartedly for the support following my first performance on the broadway stage as Fanny Brice. I know I’ve said it before, but joining this cast has truly been the greatest honor. I am so grateful to every person involved in this production. (@bruglikas / @broadwaybruce_ @funnygirlbwy ).” In a separate post, shared on Sept. 8, the 36-year-old shared a set of photos with many friends that came to see her performance including director Ryan Murphy, Jonathan, and more. She captioned the sweet photo, “People who need people are the luckiest people in the world.”

When Beanie took on the role in 2021, it marked a historic moment, as it was the first time the musical returned to the NYC stage since Barbra Streisand, 80, originated the role in 1964. On July 11, Lea reacted to the official announcement of her casting in the hit musical on Instagram. She wrote, “A dream come true is an understatement. I’m so incredibly honored to join this amazing cast and production and return to the stage playing Fanny Brice on Broadway. See you September 6th. @funnygirlbwy #FUNNYGIRL.”

‘Glee’ Cast Then & Now: See The Show’s Stars’ Transformations Ahead Of Reunion