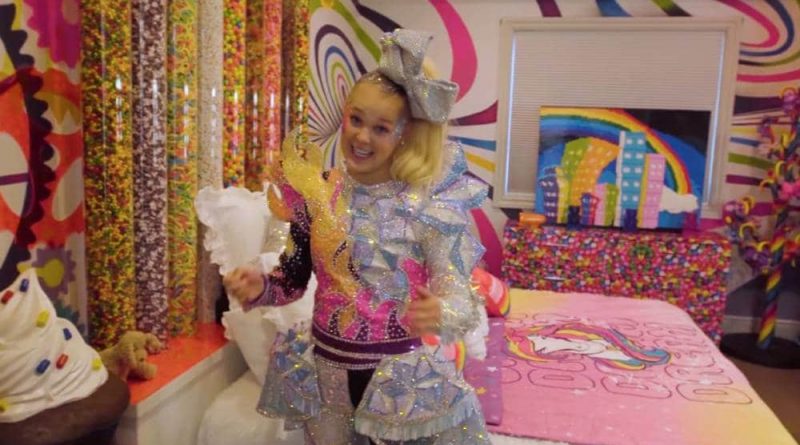 JoJo Siwa shows off her candy-filled bedroom during an appearance on MTV’s Cribs. (YouTube/MTV Vault/MTV)

JoJo Siwa has offered fans a glimpse into her psychedelic home, complete with a colourful bedroom filled to the brim with a hoard of candy.

The 18-year-old influencer shows off her impressive abode in Tarzana, California, where she lives with her family, in an episode of MTV Cribs.

In a clip from the episode, Siwa showed off her colourful bedroom which would give Willy Wonka’s chocolate factory a run for its money.

The camera panned around the kaleidoscopic room to reveal a lollipop tree statue, a headboard filled made up of giant tubes of candy and candy-themed furniture.

“One day, I just want to take a hammer and smash these,” Siwa said, gesturing to the huge candy containers.

She explained that her walls and ceiling – which both boast colourful swirls and candy motifs – are her favourite parts of her room.

“Some nights, I just lay in my bed and look up at my ceiling, and I’m like ‘whoa, this is crazy’,” JoJo Siwa said as she flopped on her unicorn bedspread.

Siwa previously showed off her mansion in a “2020 House Tour” video on her YouTube channel. In the video, Siwa shared that she has a “pet unicorn” named Cob – a lifesize statue of a unicorn complete with a rainbow mane and, of course, a giant bow.

She also showed off her “game slash slime room” which had a pool table, a crane game, JoJo Siwa dolls and several candy machines as well. The walls of the room were covered with paint made to look like slick, green slime.

Fans starved for more JoJo Siwa content can keep their eyes peeled for the next episode of the US reality show, Dancing with the Stars.

Siwa made history as one half of the first same-sex couple to compete on the show, and they ended up earning the highest score during their Dancing with the Stars debut.

Before the show, Siwa shared that she is “really, really proud” to be “dancing with another female”.

“I came out in early 2021 and what I love to do is make truly being who you are easier for kids,” Siwa said, People reported.