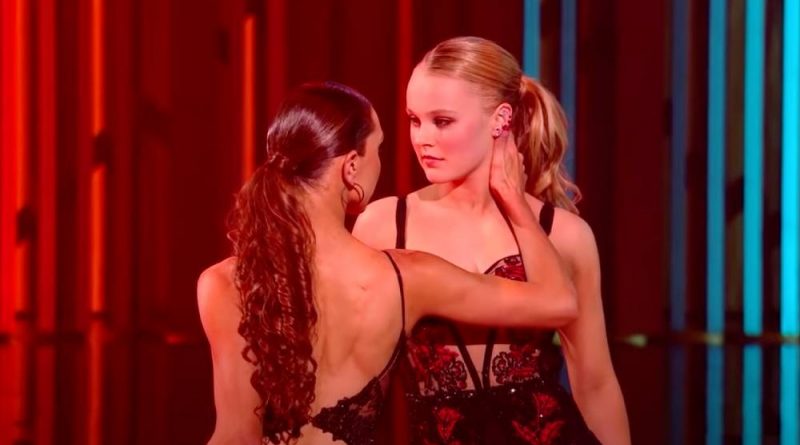 JoJo Siwa returned in amazing form for two amazing routines that impressed the judges and landed her in the Dancing with the Stars’ semi-finals.

Siwa has consistently performed well on the dancing competition – even garnering perfect scores during her stint on the show – before she was briefly in the bottom two last week on Dancing with the Stars.

But never one to give up, Siwa gave her absolute best in not one but two amazing performances alongside her professional partner Jenna Johnson for the show’s Janet Jackson night. The duo hit the dance floor in sparkly black costumes for a stunning, acrobatic routine to the 2007 hit “Feedback”.

Judge Bruno Tonioli called Siwa’s salsa routine “drop dead sexy” while Carrie Ann Inaba said it was “amazing”. The pair ended up scoring 39 out of a possible 40 points, with only Lenn Goodman denying them the perfect score.

After the electric solo performance, Siwa and Johnson went into a scorching head-to-head rumba battle against Olivia Jade and Val Chmerkovskiy to Jackson’s “That’s the Way Love Goes”. While it was a close call between the teams, Siwa and Johnson absolutely nailed the routine with their blistering moves during the harmonious performance.

Inaba even gave extra points to the pair for their palpable “passion and chemistry”, shooting them straight into the Dancing with the Stars semi-finals.

Even fans online took a moment to comment on the obvious chemistry between Siwa and Johnson.

I WAS WATCHING THAT JOJO AND JENNA RUMBA ✨RESPECTFULLY✨ I MEAN THE CHEMISTRY 👀#DWTS pic.twitter.com/DnXAN0hwDF

I love Carrie Ann being so shook by Jojo and Jenna’s dance chemistry. Me too, girl, me too #dwts

I edited jojo and jenna’s rumba dance off so that it’s just them you’re welcome pic.twitter.com/UCKJ1bPmSX

OH MY GOD JOJO AND JENNA ATE UP THAT SEXY RUMBA

Johnson revealed to Last Night Now that she previously told JoJo Siwa that the only dance she didn’t want them to perform this season was the rumba. She described the rumba as a “very sensual” “dance of love” that “requires a lot of chemistry”, which Johnson thought “works really well for a male and a female”.

Siwa praised her dancing partner on social media for being a “legend” and continuing to “out do yourself every week”. She said the choreography for their solo routine this week was “a push” and “was HARRRDDD for me” on Instagram.