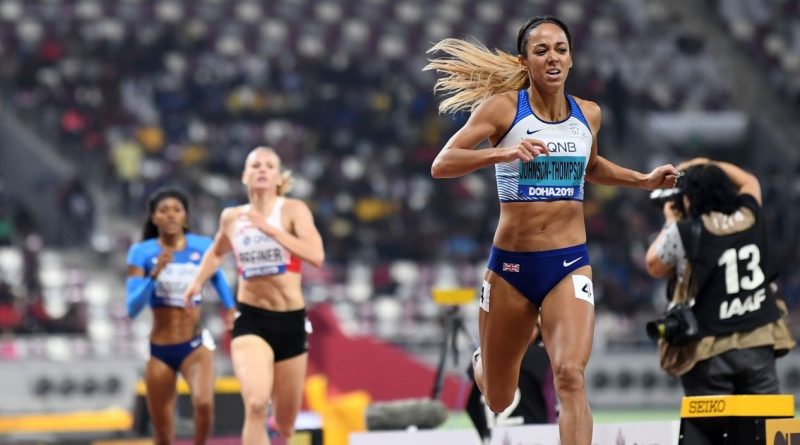 “Some athletes have benefitted from the postponement. Others would have preferred the Olympics to have been last year. I think I’m probably one of them”

She already hurdles, jumps, runs and throws for her country, writes Alex Spink in Tokyo.

Now Katarina Johnson-Thompson is being asked to LIFT too.

Raise the spirits of a track and field nation down on itself after a dreadful start to its Olympic programme.

The idea was the load would be shared with fellow world champion Dina Asher-Smith.

Speed demon Dina would make up for Sir Mo Farah’s failure to get to Tokyo by filling the opening weekend slot that had been reserved for him.

Zharnel Hughes would then follow Asher-Smith nabbing Britain’s first medal for 61 years in the women’s 100m by bagging the nation’s first since 1992 in the men’s event.

Instead Asher-Smith pulled up lame, Hughes false started in his final and was disqualified – and Johnson-Thompson finds herself with it all on her shoulders.

Which would have been fine in 2019 when the Liverpudlian sat on top of the heptathlon world after triumphing in Doha.

KJT: “It’s been almost eight months since I had an operation and it’s a victory to make it this far”
(

It would still have been okay a year ago as the momentum from that epic desert night carried her towards Tokyo.

But then came the pandemic, Olympic postponement and a ruptured Achilles that turned her world on its head.

Where there was expectation there is now hope, certainty replaced by less than cast-iron belief ahead of the start of competition in the early hours tomorrow..

“Others would have preferred the Olympics to have been last year. I think I’m probably one of them.

“But all things considered I’m happy. I’m here, I’m at the start line. I’ve just got to adapt.”

The loss of training time followed by minimum competition means the Liverpudlian goes into battle on a wing and a prayer.

She has gone from favourite 12 months ago to a contender with a puncher’s chance. Yet the fight she has shown to get here means she should not be dismissed.

Dina Asher-Smith in tears after failing to make 100m final

“It’s been so tough, super hard. It’s been almost eight months since I had an operation and it’s a victory to make it this far.

“I’m past the point of worrying about parts of my body on the start line, asking myself ‘can I handle this’? I’m at a stage where I’m able to do a heptathlon and hopefully the occasion will make me perform better.”

There are unlikely to be too many mortgages wagered on a KJT gold given the year she has endured.

KJT: “I love the challenge of heptathlon, I love the sport. It’s occasions like this that I live for”
(

What the adversity has done, she claims, is harden her mentally and if her body holds up it might just take her further than some expect.

“I love the challenge of heptathlon, I love the sport,” she said. “It’s occasions like this that I live for.

“I used to get overwhelmed by it, scared I wasn’t going to perform. Now I just want to get out there and see what happens.

KJT: “I just want to get out there and see what happens”
(

“This is the most mentally challenging event. Physically you have to be strong. You need speed, power, endurance. But you have to maintain concentration throughout two days.

“You can take things too personally and feel you deserve certain medals. I know I have in the past.

“But I feel I’m ready for this now. All that matters to me here is making sure I leave with no regrets.”