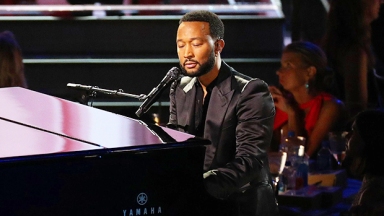 
EGOT winner John Legend took to the stage for the 2022 Emmys, sat down at his piano, and belted out the first ever live performance of his the song ‘Pieces’ from his new album Legend. He chose his moment wisely, performing the song as the backdrop for the ceremony’s In Memoriam segment.

John’s song was applauded by the crowd, which included his beautiful wife Chrissy Teigen. The 36-year-old pregnant mama rocked a long-sleeve, metallic pink patterned gown that put her baby bump on full display and she looked gorgeous.

Having John perform the song almost didn’t happen. “Normally we would not do a new song in a situation like this,” explained Emmys executive producer Reginald “Reggie” Hudlin during a press event the Thursday before . “We listened with skepticism which quickly turned to wild enthusiasm. This is an incredulous powerful moving song.”

Last year, Leon Bridges and Jon Batiste teamed up with a moving, unplugged version of the song Bridges. It was a year filled with loss, as stars like Larry King, Alex Trebek, Cicely Tyson,Ed Asner, and Michael K. Williams were all remembered. The year before that,  H.E.R. performed a touching rendition of Prince’s “Nothing Compares 2 U”, the show celebrated the lives and legacies of such beloved personalities like Regis Philbin and Naya Rivera.