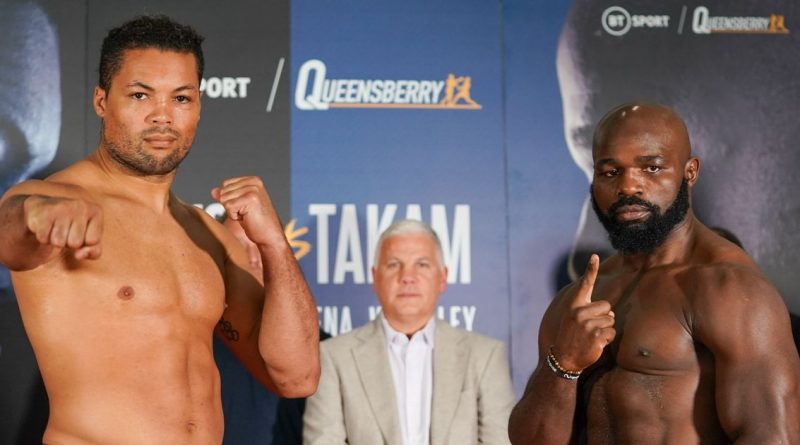 
Joe Joyce will have a considerable weight advantage going in to his heavyweight title fight with Carlos Takam.

The weigh-ins for Joyce vs Takam took place on Friday, with the undefeated Joyce weighing in at 263 ¾ pounds and Takam standing on the scale at 248 ½ pounds.

Promoter Frank Warren is hoping ‘The Juggernaut’ can defend his International heavyweight titles against Takam to set up a fight against the winner of Anthony Joshua vs Oleksandr Usyk on September 25.

“Joe will be in the No 1 spot after the fight between AJ and Usyk takes place. He can’t afford to slip up, everything is on the line for him, the world title fight is on the line, he can’t make a mistake,” Warren said.

“He’s on the cusp of doing something really big and I’m looking for him to put in a big performance and make a statement and show everyone that this guy can win a world title.”

WBC heavyweight champion Tyson Fury was originally scheduled to fight Anthony Joshua on August 14, but was then forced to fight Wilder in a trilogy only to face another delay after an outbreak of COVID-19 in his training camp.

This led to Warren assessing the top of end of the heavyweight division, referring to it as a “mess”.

“The heavyweight scene at the top end is a mess to say the least. The fight between Tyson [Fury] and AJ should have taken place and now Tyson’s fight against Deontay Wilder has been pushed back until October. AJ against Usyk is now in September.

Who wins on Saturday between Joyce and Takam? Comment below

“In the meantime, the next generation of heavyweights are lining up, getting into position and filling the mandatory positions,” Warren said.

Takam revealed that he is close friends with UFC heavyweight champion Francis Ngannou and even helped him prepare for his title win against Stipe Miocic earlier this year. Ngannou has also sparred Joyce in the past, with Takam revealing the details.

“This was a long time when Joe Joyce sparred with Francis. Francis is my brother and he told me ‘Yes, he’s (Joyce) a strong guy, he punches hard, but it’s not really technical boxing.”

Joyce vs Takam takes place on tomorrow night, July 24, on BT Sport 1. The main event is expected to take place at around 10pm BST, with coverage of starting from 7:15 BST.

Further down on the card, Hamzah Sheeraz will make the third defence of his WBO European title against Ezequiel Gurria. Welshman Chris Elkins will look to defend his British and Commonwealth welterweight titles against Ekow Essuman.