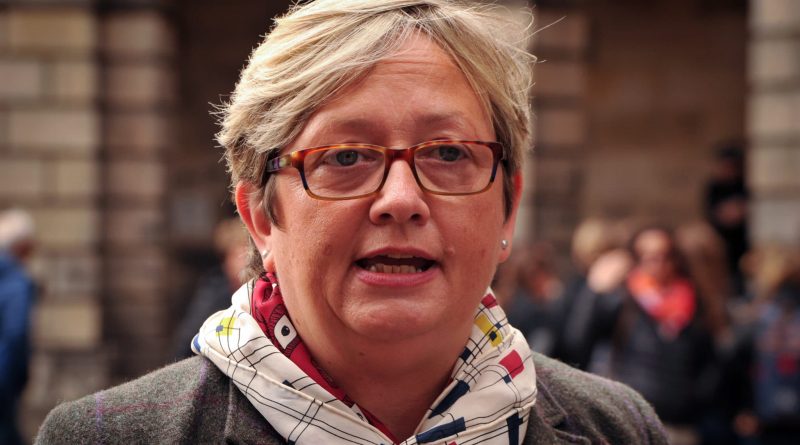 The Scottish National Party (SNP) is yet again facing pressure to take action against MP Joanna Cherry, who has appeared to suggest that conversion therapy for trans people should remain legal.

Cherry, a “gender critical” MP who has consistently and vehemently opposed trans rights reforms, was sacked from her party’s Westminster front bench in a reshuffle shortly after leader Nicola Sturgeon vowed to tackle transphobia within the SNP.

The SNP has not specified why Cherry was removed and she has denied being transphobic.

But on Saturday (13 November), even Cherry’s critics were shocked when she took to Twitter, appeaering to suggest that trans people should be legally subjected to conversion therapy, in light of the government’s recently released proposals for a UK conversion therapy ban.

She tweeted: “Re: conversion therapy, which any right thinking person should oppose, we must not make it a criminal offence for therapists to try to help patients with gender dysphoria to feel comfortable in their birth sex.

And re conversion therapy which any right thinking person should oppose we must not make it a criminal offence for therapists to try to help patients with gender dysphoria to feel comfortable in their birth sex. As we used to say #Somepeoplearegay. #GetoverIt

Cherry’s stance on trans rights has long been at odds with SNP leader Nicola Sturgeon’s.

Sturgeon has called for gender recognition reforms for trans Scots and made clear that trans rights and women’s rights are not, and have never been, mutually exclusive. Earlier this year, her party’s LGBT+ manifesto listed ending conversion therapy as first on the list.

Following her latest tweet, SNP members desperately called on Sturgeon to, finally, “do literally anything about Joanna Cherry”.

SNP do literally anything about Joanna Cherry challenge.

Joanna Cherry – Do something @theSNP

Kirsty Blackman, SNP MP for Aberdeen North, wrote on Twitter: “Conversion therapy is always wrong. There’s not and shouldn’t be a get out clause, for any reason.”

She added that she would continue to publicly criticised Cherry “because complaining through the proper channels, repeatedly, for years, has resulted in nothing happening and these views still being expressed – and still causing harm to so many people”.

“Kirsty, why do you keep publicly criticising Joanna Cherry’s views on trans issues?”

“Because complaining through the proper channels, repeatedly, for years, has resulted in nothing happening and these views still being expressed – and still causing harm to so many people.” 🤷 https://t.co/znQ3FP7X2r

SNP councillor Fay Sinclair tweeted: “I have written to the National Secretary several times now regarding the escalating transphobia displayed by Joanna Cherry. I’m disappointed not to have had any response.

“So I’m publicly calling on the SNP to address this now. There should be no place for bigotry in our party.”

I have written to the National Secretary several times now regarding the escalating transphobia displayed by Joanna Cherry. I’m disappointed not to have had any response. So I’m publicly calling on @theSNP to address this now. There should be no place for bigotry in our party. https://t.co/lExWFMIgrg

Activist and SNP staffer Richy Edwards, who is himself a survivor of conversion therapy, pointed out the painfully ironic fact that Cherry’s comments had been made at the start of Trans Awareness Week.

Edwards wrote: “There will never be enough characters / long enough threads to do justice to the very real and painful experience of being subjected to this abuse.

“If you have been fortunate enough to not go through said practices, I would urge you to listen – really listen – to those who have.

🧵/My own experience with so-called Conversion Therapy and why the last 24 hrs has been particularly sore.

Not even as an SNP member – that’s a choice, one that I’m very committed to, but ultimately not at all paramount.

But being a queer person, a human being, a survivor, is.

“Let’s be clear, so-called conversion therapy is abuse. It’s torture. It has been torture – 17 long years of abuse and shame. It’s literally changed me as a human.

“It is one of the most insidious practices and it permeates your whole life. It nearly cost me my life. Several times.”

He described Cherry’s comments as an “attack on trans people”, and added: “To see someone try to co-opt a popular and effective slogan of acceptance, and try to equate it into a repressive form, so blatantly was – is – breathtaking.”

The SNP and Joanna Cherry did not immediately respond to a request for comment, however Cherry defended her tweet in a statement, per the Scotsman.

“My tweet made it quite clear that I oppose conversion therapy as conventionally understood,” she said. “As a lesbian myself, this is hardly surprising.

“However, I share the concerns of many that the inclusion of the concept of ‘gender identity’ in the UK Government Bill risks threatening professionals working with children and vulnerable people who are having issues with their gender if they seek to explore the reasons for their distress.”

“Over the past few years, there has been a very worrying rise in the number of children, particularly girls, becoming convinced they were ‘born in the wrong body’ and seeking to take puberty-blocking drugs and cross-sex hormones. …

“I am concerned that young women, particularly those who may be lesbians, should be offered alternatives to such drastic medical pathways.”

Scotland’s only gender clinic for young people, Sandryford, says that a young person must be at least 16 before they can be given gender-affirming hormones, in line with NHS rules in England and Wales.

Puberty blockers are difficult to access across the UK, owing to lengthy wait times and the nature of blockers. In September, it emerged that not a single trans young person had been referred to a hormone specialist this year