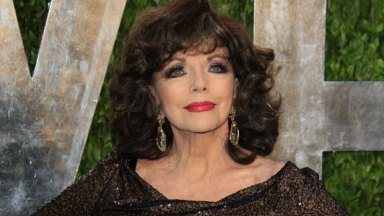 
Joan Collins, 89, looked incredibly youthful in her latest Instagram posts! The actress shared a video and pic of her and her boyfriend Percy Gibson, 57, spending time together outside during a summer vacation in South France. She wore a blue bikini and a large sun hat in the posts and added sunglasses to help keep the sun out of her eyes.

In the clip, Joan happily swam in a pool outside among green bushes. She also busted some dance moves to the song “Heart of Glass” by Blondie as she lifted her arms and cheered. The pic showed her and a shirtless Percy smiling at each other as she held onto him.

It didn’t take long for her followers to respond to the new eye-catching posts and they were full of compliments. “Great picture 📸 Kodak moment!! Queen Joan Collins looks 😍 stunning ❤️❤️,” one fan wrote while another wrote, “Such an icon!” A third called the video “brilliant” and a fourth exclaimed “So beautiful!”

Just one month before Joan posted her latest posts, she made headlines for being airlifted to a hospital to treat a trapped nerve. She took to Instagram to reveal the news with fans on July 11 by sharing a photo of herself posing in white on a boat, and writing that she had had a great time, except for her medical emergency. “Enjoying a great day out, one week before I had to go to the Princess Grace Hospital in Monaco for a trapped nerve in my leg. Not fun! But they were great,” she wrote in the caption.

Around the same time Joan revealed her hospital trip, her friend told Page Six she’s been doing well. “She’s back home in St. Tropez and is walking around,” the friend said. “She’s 89 and is still walking around in six-inch heels.” Her rep also told the outlet that she was on the mend. “The pain has been excruciating, but fortunately she’s dealt with it, and she’s OK now. She’s in the South of France enjoying the rest of her holiday,” the rep said.