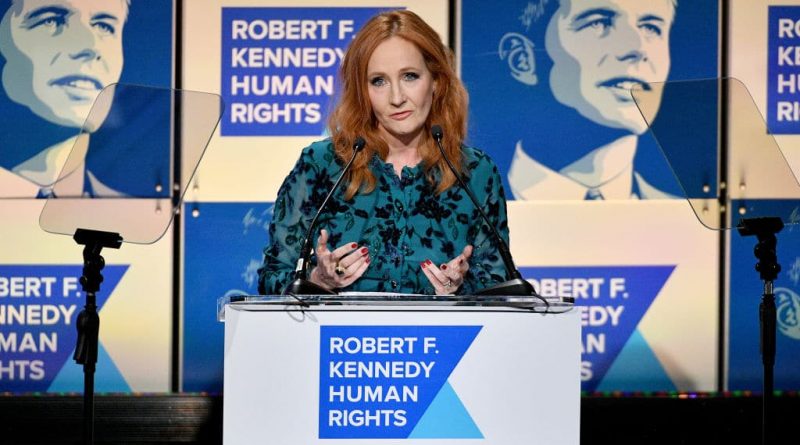 JK Rowling has condemned three actors who held a Trans Day of Remembrance protest outside her house, accusing them of deliberately exposing her private address.

A photo was subsequently shared online which showed the trio standing outside JK Rowling’s home, with part of her address visible in the background. They were holding signs that read “Trans Liberation Now”, “Don’t Be a Cissy” and “Trans Rights are Human Rights”.

On Saturday (20 November), Stars said on Twitter that she, Frost and Energy stood by the photo – however, she said they made the decision to delete it due to “an overwhelming amount of serious and threatening transphobic messages”.

In a Twitter thread on Monday (22 November), JK Rowling condemned the three actors for their Trans Day of Remembrance demonstration.

“Last Friday, my family’s address was posted on Twitter by three activist actors who took pictures of themselves in front of our house, carefully positioning themselves to ensure that our address was visible,” Rowling wrote.

Last Friday, my family’s address was posted on Twitter by three activist actors who took pictures of themselves in front of our house, carefully positioning themselves to ensure that our address was visible. 1/8

She thanked her followers for reporting the image to Twitter Support and also expressed gratitude to Scottish police for their assistance. JK Rowling asked those who shared the image, including people who did so in condemnation of the actors’ demonstration, to delete their tweets.

Rowling went on to say she has watched women including Allison Bailey, Rosie Duffield, Joanna Cherry, Kathleen Stock and others “subject to campaigns of intimidation” for expressing anti-trans views.

“None of these women are protected in the way I am,” Rowling wrote. “They and their families have been put into a state of fear and distress for no other reason than that they refuse to uncritically accept that the socio-political concept of gender identity should replace that of sex.”

Rowling continued: “I have to assume that [Georgia Frost, Holly Stars and Richard Energy] thought doxxing me would intimidate me out of speaking up for women’s sex-based rights. They should have reflected on the fact that I’ve now received so many death threats I could paper the house with them, and I haven’t stopped speaking out.”

Stars, Frost and Energy have all deactivated their Twitter accounts since Rowling tagged them directly in her tweet.

The controversy comes after a turbulent few years for JK Rowling, who has repeatedly positioned herself at the centre of the UK’s toxic debate surrounding trans lives.

The writer waded into the so-called “culture war” in 2019 when she stated her support for Maya Forstater, who has fought to have “gender critical” views protected under the Equality Act.

The following year, Rowling published a lengthy essay on her own website in which she spoke of her “deep concerns” that the trans rights movement is having an adverse effect the education and safeguarding of children.

Elsewhere in that essay, Rowling suggested that she might have transitioned if she had been born in a later era because “the allure of escaping womanhood would have been huge”. The essay sent shockwaves through the UK’s trans community, with many longtime fans expressing disappointment in the author.

PinkNews has contacted representatives for Holly Stars and Georgia Frost for comment.