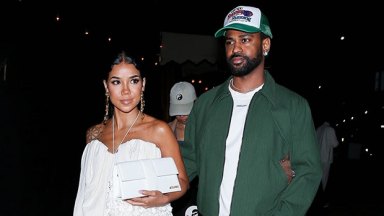 
Big Sean and his pregnant girlfriend, Jhene Aiko, enjoyed time together on July 24 before their family grows by one. The couple, who are expecting their first child together, were pictured leaving The Nice Guy restaurant in West Hollywood, California. Sean, 34, sweetly placed his hand on Jhene’s backside as her growing baby bump was on full display.

Sean wore a green zip-up jacket over a white T-shirt that he tucked into a pair of fancy brown pants. The “Hate Our Love” hitmaker also sported a graphic green hat and a pair of black shoes. He looked so handsome and attentive towards Jhene, who he’s been dating on-and-off since 2016.

Jhene, 34, looked gorgeous for the dinner date with an off-the-shoulder white dress that complimented her pregnancy bump. Half of Jhene’s dress had ruffles which reached beyond her gold open-toe shoes. The six-time Grammy nominee rocked a silver necklace and gold earrings and she carried a white clutch purse in her hands.

Sean and Jhene recently celebrated her pregnancy with a nude maternity shoot that they shared to Instagram on July 21. The duo stripped down and clasped hands in front of Jhene’s stomach in the the photos, as Jhene lovingly looked down at her growing belly while Sean looked at the camera. “Thankful For My family,” the soon-to-be dad commented on the ethereal photo.

The upcoming bundle of joy will be Jhene’s second child and Sean’s first. The doting mom already shares daughter Namiko Love Browner, 13, with ex O’Ryan. Although she sometimes will share adorable photos of the teen on her Instagram, Jhene tends to keep her first child’s life generally private.