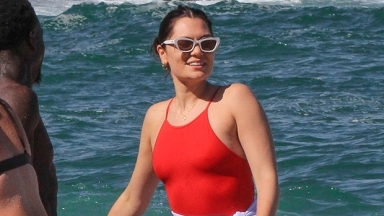 
Jessie J, 34, enjoyed some much-deserved R&R while at the beach with her boyfriend, Chanan Colman, 38, in Rio de Janeiro on Sept. 8. The “Bang Bang” singer rocked a sexy one-piece swimsuit in a fire-red hue while she enjoyed a day off (she recently did a festival performance in Brazil). Jessie paired the stylish swim ensemble with a super-sheer white skirt that she wrapped around her waist, along with matching white sunglasses to protect her eyes from the strong sun.

While she enjoyed some time splashing in the ocean, she also sported some chic jewelry: Jessie wore gold hoop earrings, a slim bracelet, and a charming minimal necklace for her day at the beach.

She also appeared to be having some fun with her boyfriend! Her beau was spotted giving the songstress a piggyback ride when they took a break from the natural water and switched over to the pool. Chanan wore a pair of on-trend green trunks with an abstract pattern while spending quality time with his beautiful lady.

Jessie and Chanan were in the seaside city in Brazil for the Rock In Rio music festival where Jessie performed that same night. She shared a sweet video on her Instagram to celebrate the fun night out and captioned it, “TONIGHT… ROCK IN RIO all my Brazilian heartbeats who can’t be with me in person can watch it LIVE • 9.15pm I’m headlining the Sunset stage Can’t wait.” In the post, Jessie was seen enjoying the amazing sunset while putting her hair up in a casual updo before she got ready to glam-up for the show.

Despite performing the iconic musical festival, the singer has actually not released new music in over a year. Her single “I Want Love” premiered back in June 2021, and prior to that, she released the single “One More Try” in 2019. Some of her hit songs include: “Bang Bang,” “Price Tag,” “Who You Are,” and “Domino.” The United Kingdom-born popstar rose to fame back in 2011 when her debut studio album, Who You Are, was released. Jessie has collaborated with many prominent artists including Becky G, Big Sean, Brandy, and rapper 2 Chainz.

The photos from her fun day in the sun come just three weeks after Jessie revealed a heartbreaking pregnancy loss on her Instagram. Her Aug. 18 post read, “When I was 16 years old I wrote a list of things I wanted by the time I was 30 • 1st thing on the list was to be a Mum. Now I’m nearly 35 and some days the grief of losing a baby and it not being easy to have one, and wanting my life in that way to look completely different to what it looks like right now just overwhelms me.”

Her long post continued, “I know it’s healthy and normal to have days of complete sadness and to honour all the feelings that come up, good and bad. The bad isn’t often at all and yes I could go through this moment right now today alone in private and usually do, but today I am here. Because I know thousands of people around the feel just like I do. Maybe you read this and feel the love I have for you. I hope you can. Connecting is key. Hugging you all.” After dealing with such an emotional experience, we are happy to see Jessie enjoying life and looking very joyful!