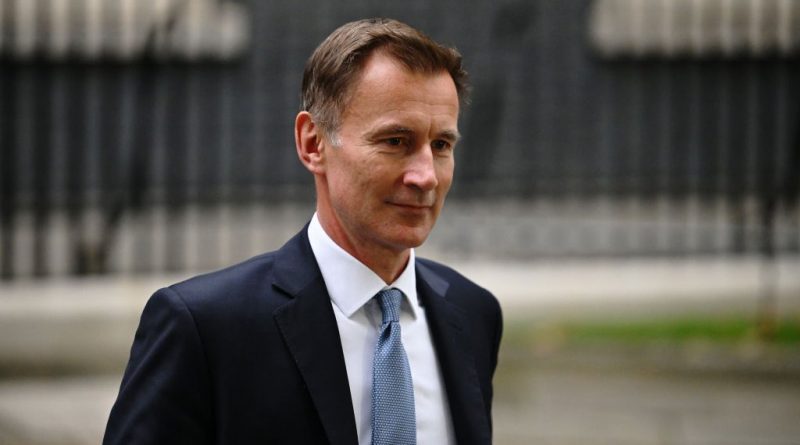 
The U.K’s fourth finance minister this year, Jeremy Hunt, was appointed by Prime Minister Liz Truss on Friday. Today, he unraveled the economic agenda she established with his predecessor Kwasi Kwarteng, who was fired after just 38 days on the job, following his “mini budget” last month that entailed a series of unfunded tax cuts for the wealthy that angered the public, spooked markets, and saw the British pound tumble to a 37-year low.

When Hunt received word that a “Liz Truss” wanted to talk to him about the role of Chancellor of the Exchequer, as the position of finance minister is known in the U.K., he assumed it was a prank, Robert Peston, the political editor of ITV News, reported.

Hunt’s instatement was very real, however, with Truss calling him “one of the most experienced and widely respected government ministers and parliamentarians” in a news conference Friday. Many view Truss’s decision to appoint Hunt as a move to calm investors’ nerves, and fend off calls for her to step aside. (She took office as Prime Minister last month after an internal party ballot representing less than 1% of the British electorate chose her as party leader to replace Boris Johnson.)

Hunt, a two-time leadership candidate who backed Truss’s rival Rishi Sunak in the 2022 Conservative leadership contest, is now arguably the most powerful politician in Britain. He wielded that power on Monday to scrap “almost all” the deeply controversial tax cuts outlined in Kwarteng’s mini-budget.

Below, what to know about the U.K.’s new finance minister.

Who is Jeremy Hunt? What is his background?

Many remember Hunt for his prior bids to be leader of the Conservative party; he lost to Boris Johnson in 2019 and was knocked out of the first round of voting in the 2022 leadership contest, securing the support of only 18 Members of Parliament.

During his latter leadership bid in July, Hunt wanted to reduce the corporate tax rate to 15%, a view that is now in opposition to what he announced in Monday’s emergency fiscal statement. Under Kwarteng, the U.K. was set to scrap a planned increase in the corporate tax rate from 19% to 25% in April that was announced under the Johnson government.

Nevertheless, Hunt is seen by his peers as a reliable pair of hands.

An Oxford University graduate, he began his political career as MP for South West Surrey in May 2005. In May 2010, Hunt was appointed Secretary of State for Culture, Olympics, Media and Sport, a role in which he oversaw the successful 2012 London Olympics.

In April 2012, then-Labour leader Ed Miliband called for Hunt to resign as culture secretary over allegations that he acted as a back channel to Rupert Murdoch’s News Corporation despite holding a quasi-judicial decision-making role on whether to allow its takeover of BSkyB (now Sky media company).

Hunt rose to prominence as the longest-serving health minister between 2012 and 2018. He became embroiled in a 2016 dispute with junior doctors over National Health Service contracts and pay for evening and weekend work. His tough stance resulted in the first junior doctor strikes in 40 years, with hospital staff in England walking out of routine and emergency care. Hunt went on to impose a disputed contract.

Hunt’s final cabinet position was as Foreign Secretary from July 2018 to July 2019, under former Prime Minister Theresa May’s leadership. During his tenure, Hunt said he did “everything I could” in his role to secure the release of Nazanin Zaghari-Ratcliffe. The British-Iranian charity worker spent six years in detention on spying charges after she was arrested in Iran.

Why did he replace Kwasi Kwarteng?

Kwarteng is being likened to a “sacrificial lamb” after he was fired on Friday due to the market response to the unfunded £45 billion ($51.4 billion) of tax cuts in the mini-budget.

On Thursday, a day before being fired, Kwarteng told reporters that he was totally focused on delivering tax cuts to boost economic growth, and said, “Absolutely 100%. I am not going anywhere.”

Kwarteng’s economic agenda had set out plans to abolish the 45% rate of income tax for the wealthiest Britons, a decision which Truss and Kwarteng later U-turned on, and the cancellation of a planned rise in corporation tax from 19% to 25% in April. Additionally, the basic rate of income tax was due to be cut from 20% to 19%.

Also announced was an energy price guarantee that would cap the average household energy bill at £2,500 ($2,857) annually for two years, among other measures.

But the unfunded tax cuts forced the Bank of England to intervene to try to restore market stability—and prompted fierce criticism of both Kwarteng and Truss.

Why is Hunt seen as a stabilizing force?

Hunt is considered to be aligned with orthodox Treasury thinking around balanced budgets and fiscal discipline. On Monday, he said he was willing to make decisions of “eye-watering” difficulty to restore trust in the U.K.’s finances.

Beyond scrapping the tax cuts in the mini budget, Hunt announced that the energy price guarantee unveiled last month, which was a large part of Truss’ political offering, would only remain in place until April rather than the two years that was originally proposed.

Hunt will outline a full budget on Oct. 31 with forecasts from the Office for Budget Responsibility (OBR), after Kwarteng declined to get his plans costed from the fiscal watchdog.

Can Hunt fix the U.K. economy?

Speaking in his emergency statement on Monday, Hunt said: “A central responsibility for any Government is to do what is necessary for economic stability.” He added that no government can control markets but they can give certainty about the sustainability of public finances.

According to a press release, Nigel Green of deVere Group, a financial advisory organization, said Hunt’s measures will only calm markets temporarily.

“Markets appear reassured for now. The pound gained and gilt yields dropped as the new chancellor set out his emergency measures aimed at stabilizing the extremely choppy waters of the last couple of weeks,” Green said. “However, we expect that the new measures to calm financial markets will only work temporarily.”

The U.K., like other countries, is grappling with a once-in-a-generation cost of living crisis brought on by soaring energy prices linked to Russia’s war in Ukraine and ongoing global supply chain disruptions due to the COVID-19 pandemic.